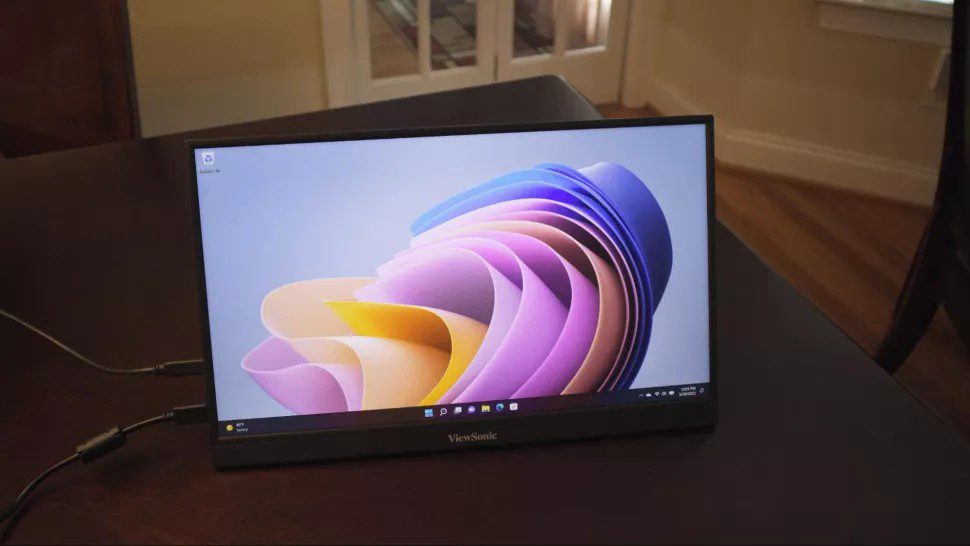 ViewSonic has managed to load the VX1755 with a big screen, 144Hz refresh rate and a reasonable price tag. It may not offer all the bells and whistles of its closest competitors, but it nails the basics.

Includes a high-quality magnetic cover to protect the display

The ViewSonic VX1755 is a compelling entry in the growing field of gaming-centric portable monitors. While most monitors in this segment sport 60 Hz panels, the VX1755 supports up to a 144 Hz refresh rate backed by AMD FreeSync technology. It is also on the larger side for a portable monitor, measuring 17.2 inches across diagonally.

The VX1755 brings a lot to the table for anyone looking for a large display that is still portable enough to tote around when traveling. The IPS display boasts a 1920 x 1080 resolution, which puts it in good company with the similarly-sized Asus ROG XG17AHPE. ViewSonic aims to deliver a lot of bang for the buck with the VX1755 considering its price tag of $299 ($100 less than the Asus ROG XG16AHPE and $200 less than the XG17AHPE). So, how does it stack up to the competition? Read on to find out.

Design of the ViewSonic VX1755

If you’ve seen the ViewSonic TD1655, then the design of the VX1755 should be familiar to you. The VX1755 employs a high-quality plastic build with a black front and silver back. Thin bezels surround the IPS panel on three sides, while a much larger bezel below the display highlights centrally-positioned ViewSonic branding.

Like the TD1655, ViewSonic uses a sturdy metal pop-out stand with a stiff hinge that allows you to find the perfect angle to suit your viewing preference. Despite the mismatch in materials, the stand’s engraved triangular pattern and color match the rest of the plastic back housing, which is a nice touch. 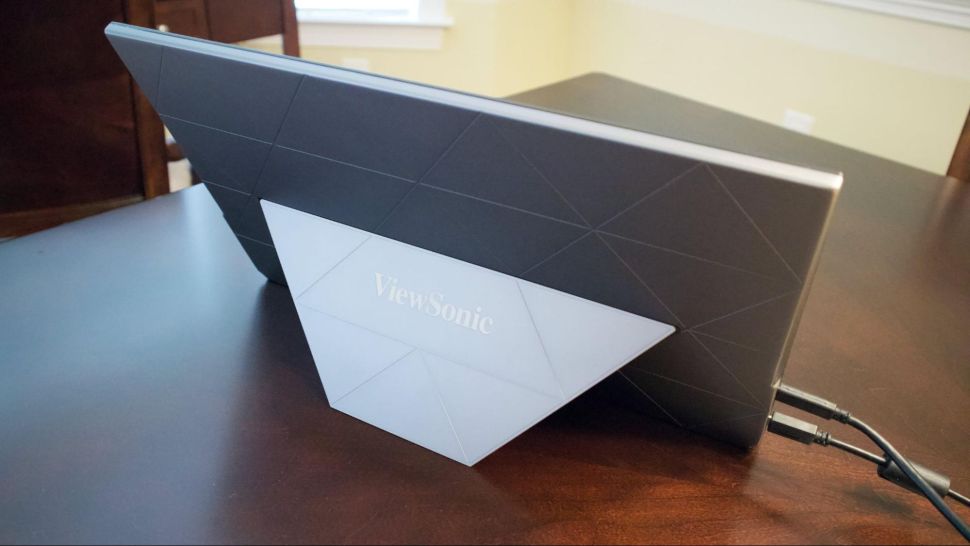 At the bottom of the monitor, you’ll find two 0.8-watt speakers that aren’t anything to write home about regarding volume or sound quality. At about mid-volume, the audio sounded a bit hollow and tinny, lacking any bass or heft when listening to The Weeknd on Pandora or watching the trailer for Top Gun: Maverick on YouTube. They’ll work in a pinch if you’re hooking the VX1755 up to a Nintendo Switch or a PlayStation 5 for on-the-go gaming, but your laptop’s built-in speakers are probably far superior.

On the left-hand side of the display, ViewSonic gives you two USB-C ports (DisplayPort Alt-Mode supported), a Mini-HDMI 2.0 port and a 3.5mm headphone jack. On the right side of the display, you’ll find a Power LED and five identically-shaped buttons to control the On-Screen Display (OSD). This is a departure from the 5-way joystick found on the smaller, 15.6-inch TD1655. 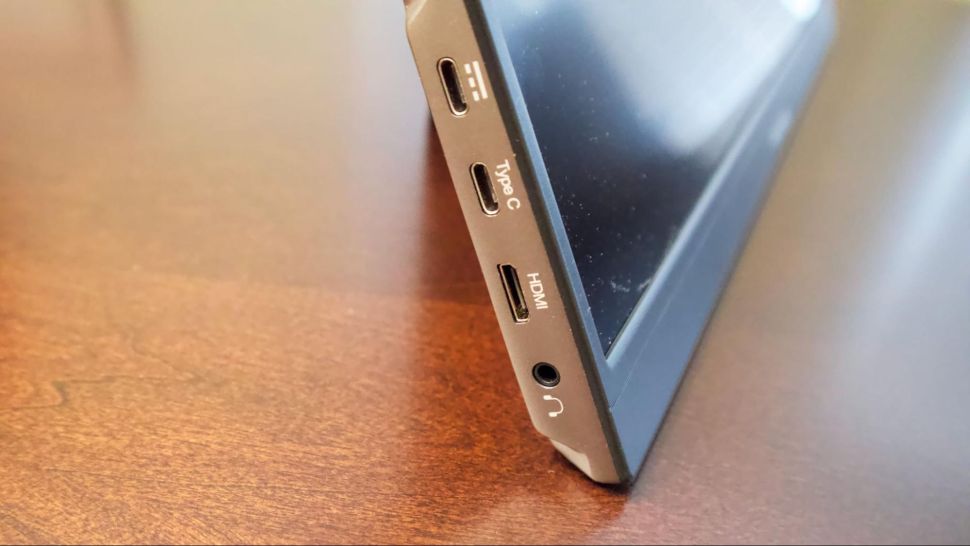 For transporting duties, ViewSonic includes a tri-fold display cover that attaches magnetically to the back panel from the top, and flips over to protect the entire front. Magnets located in the bottom display bezel keep the cover in place. While it does not provide 360-degree protection like a full case, we appreciate that ViewSonic at least provides some semblance of protection for the VX1755.

Image Quality and Performance of the ViewSonic VX1755

The VX1755 uses a 17.2-inch IPS display with a resolution of 1920 x 1080. Like most portable monitors, it uses a matte finish to cut down on reflections. I also noted that viewing angles were very wide with minimal color-shifting at extreme angles.

ViewSonic claims that the VX1755 can hit a maximum brightness of 250 nits, and our lab testing showed that it hit that figure exactly. While the display is not overly bright, I found it as easy to read in a well-lit office environment and as outside on a cloudy day.

Like the TD1655, the VX1755 lags behind on color measurements compared to its peers like the Asus ROG XG17AHPE and even the more productivity-centric ThinkVision M14t. We measured 64.2 percent of the sRGB color space and just 45.5 percent of DCI-P3. You definitely won’t be using the VX1755 for any color-critical work, but it is more than up to the task of handling general productivity tasks 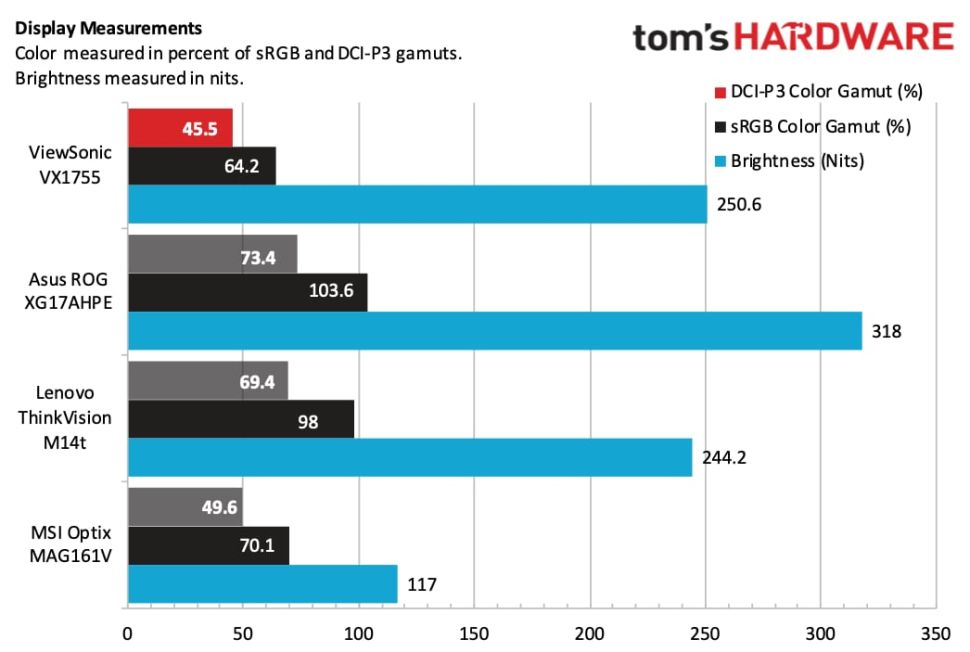 Colors did look a little washed out when I watched YouTube videos. The problem was particularly noticeable when I streamed an episode of The Next Big Thing with Magnus Walker, where a Ferrari F40 was driven through Beverly Hills at night. The rich Rossa Corsa (Racing Red) of the famed 1980s supercar looked faded and dull compared to how it looked on the XG16AHPE that we recently tested. When placed next to the 14-inch MacBook Pro with its mini-LED display that we used to perform some tests with the VX1755, the difference was even more stark. But we’re talking about a portable display that retails for under $300, so we have to temper our expectations somewhat.

We mentioned that the 17.2-inch panel was one standout feature of the VX1755, but it does have another. It supports up to a 144 Hz refresh rate like the XG16AHPE, and backs that with AMD FreeSync Premium technology. Not only can you pair the VX1755 with a laptop to expand your workspace or simply provide a larger screen to game on (versus, for example, a laptop’s built-in 13-inch display), but you could easily use it with an Android smartphone/tablet (via USB-C) or with an Xbox Series X or PlayStation 5 console. 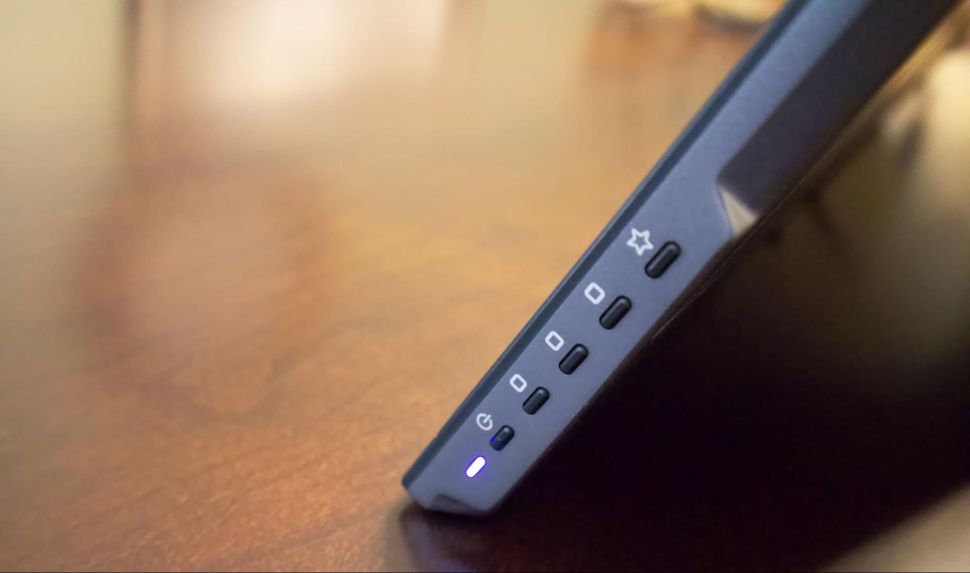 I don’t currently have a laptop on-hand capable of pushing 144 fps at 1080 x 1080, so I couldn’t max out the gaming capabilities of the VX1755. However, using a laptop with a GeForce RTX 2060, I was able to hit between 60 to 75 fps with games like Grand Theft Auto V and Shadow of the Tomb Raider with nearly maxed out settings. I’m sure if I had a laptop with a more capable graphics card under the hood like an RTX 3080 or RTX 3070 Ti (or tested on some extremely old games) that I’d be able to hit closer to that 144 fps mark with the VX1755.

I also tried the monitor with a Nintendo Switch OLED and Xbox Series X. Hooking the monitor up to either console was as simple as using the included wall adapter and USB-C cable for power and plugging in the Mini-HDMI to HDMI cable for video input and audio.

On-Screen Display on the ViewSonic VX1755

The OSD mirrors what we saw with the TD1655. The difference here is that instead of using an intuitive 5-way joystick, you’re faced with five identically shaped buttons that change their function depending on the menu. Luckily, ViewSonic provides icons positioned to the left of each button that show which action each is capable of in a given menu. So button behavior can change from Enter to Left/Right to Up/Down depending on how deep you are into the OSD. It’s not ideal, but the icons at least make the process less tedious.