If you’re going to spend hundreds on a gaming headset, there’s a good chance you might want to use it with more than one device, and for things non-gaming related like work meetings, long-distance travel and your daily commute. It seems many headset makers have realized this lately, with Corsair, Epos, and most recently SteelSeries releasing wireless headsets that can connect to your phone and a PC or console at the same time, while offering up active noise canceling to help shut out the horrors of the world outside your head.

Razer’s Barracuda Pro is the latest offering in this realm of do-it-all audio devices aiming for a spot on our best gaming headsets list. And bucking the trend for a company often known for expensive, RGB-lit hardware, the Barracuda Pro is both understated in its black plastic shell and one of the least expensive options we’ve tested in this gaming headset meets lifestyle audio realm, at $249.99. It also sounds great (thanks to 50mm “bio-cellulose” drivers), was quite comfortable for hours of use in our testing, and includes a nice rigid carrying case for taking the Pro on the go. The company also rates the headset at a solid 40 hours of battery life.

So what’s the downside? Primarily it’s the design and plastic build. There’s also no retractable/removable mic, which may turn off some gamers. Although honestly, the pair of beamforming integrated mics worked fine for me in calls, meetings, and games. If you need premium voice pickup for your gaming and streaming sessions, you might want to consider one of the best gaming microphones we’ve tested.

Still, without a boom mic or any real edginess or excitement in its design, the Barracuda Pro feels more like a lifestyle headset first and a gaming device second — which is fine. But competitors like the SteelSeries Arctis Nova Pro flip that script, and so may be a better fit for some. And while the noise canceling on the Razer headset is good (I found it about on par with my Sennheiser Momentum 3s), Sony and Bose still do a better job of blocking out the hums and drones of the outside world.

Specs for the Razer Barracuda Pro

While competing headsets tend to mix materials and add interesting design flourishes, the Barracuda Pro is almost entirely plastic, which likely contributes to its light 0.75-pound weight and comfort during hours of listening. But it also looks surprisingly boring for a Razer-designed device and doesn’t particularly feel like a premium headset. The plastic also picks up finger smudges with relative ease, so you’ll want to give it a good wipe down regularly. But at least the build feels solid.

For my head at least, the Razer Barracuda Pro was extremely comfortable. I wore it for most of a 13-hour stretch on my first day of testing and had no complaints. The padded leatherette-covered foam ear cushions and headband provided a great balance between comfort and enough clamp from the internal band to keep the headset from moving around on my dome. That said I consider my head medium-large, and the perfect fit for me was with the band not extended at all, so those with small heads may find the Barracuda Pro a looser fit. If possible, you should find a store where you can try a floor model before buying.

The left can has the USB-C charging port at the bottom. The power button behind that does quite a lot, acting as a pause button for media if you short press it (plus accepting or ending a call) and a pairing button if you hold it after turning the headset on. Double pressing the power button rejects or swaps calls, and skips to the next track. Three presses goes to a previous track. While all this functionality packed into a single button is appreciated, and at least some of it is intuitive, I would have preferred to just have a couple more buttons included for media control. The volume wheel is next up (which is plastic and feels a little cheap for a $250 headset), followed by a mic mute button near the top where the band attaches to the cup.

Note that the headset turns itself off after 15 mins without sound running through it (adjustable up to 60 mins in software). But there’s no proximity sensor that pauses audio when you remove the headset (granted, this feature can be tricky to get right). 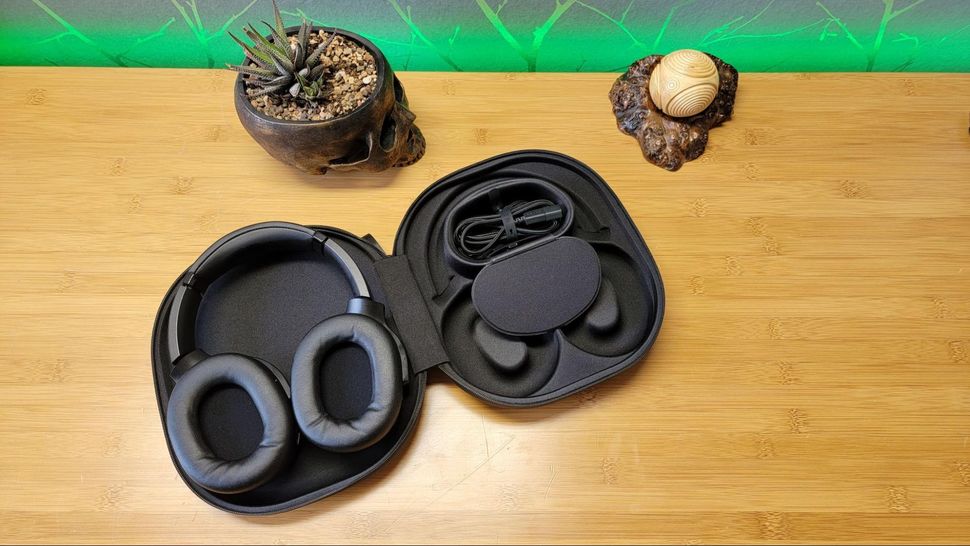 I really like that the Razer Barracuda Pro ships with a rigid carrying case, rather than just a bag (like the $100 pricier SteelSeries Arctis Nova Pro). This makes it far easier to travel with the headset. And there’s even an internal compartment for charging cables and the USB-C dongle. This is the best bundled carrying solution I’ve seen from any headset or headphones at anything approaching this price range. Bravo, Razer.

Aside from the carrying case, you get two USB cables, one USB-A to USB-C male for charging and the other USB-A to USB-C female to use for plugging the small USB-C dongle into systems with minimal Type-C ports, or those that only have Type-C ports at the back.

I tested Razer’s headset with my phone, my main gaming/work PC, and my Nintendo Switch. Audio sounded excellent, whether I was connected via Bluetooth or the 2.4 GHz dongle, thanks largely to the headset’s “TriForce Bio-Cellulose 50mm drivers.” In terms of general fidelity and crispness, I didn’t notice a difference between the Barracuda Pro and my Sennheiser Momentum 3 headphones.

Bass on the Razer headset was punchy without being overpowering, which I appreciated while listening to Rhys Fulber’s Collapsing Empires album for the first time. It was also great in games, although the company’s Synapse software nudges you to select THX Spatial Audio by default. That’s fine for games, but makes music sound hollow and crunchy. I feel like for long-term use I’d probably leave Spatial Audio off because it didn’t provide enough of an in-game benefit for me to want to deal with remembering to toggle it on and off. I also put the headset’s “Hybrid Active Noise Cancellation” to the test during a walk around my urban neighborhood, while also taking a work call. The headset does a good job blocking out things like engine and machine noise, which helps in the enjoyment of music and in being able to hear people on a call in somewhat noisy environments. It also cut wind noise, but didn’t mute the blowing sounds completely to my ears — the mics seemed to do a better job there, blocking it from the ears of the other people on my calls.

Overall I would say noise canceling here is quite good, about on par with my Sennheiser Momentum 3 headphones. I don’t have a current or recent set of high-end Sony or Bose headphones on hand to make direct comparisons there, but I have owned noise-canceling Sony headphones in the past and I feel like they did a slightly better job blocking exterior noises. But unless you’ve used some of the best noise-canceling cans in the business, you should be happy with the sound-subduing abilities of the Barracuda Pros.

For those who like to tweak their audio, there’s an equalizer, plus toggles and sliders for adding bass, normalizing sound and prioritizing voice clarity in the company’s Synapse software. But in my time testing, I found the default settings sounded best. 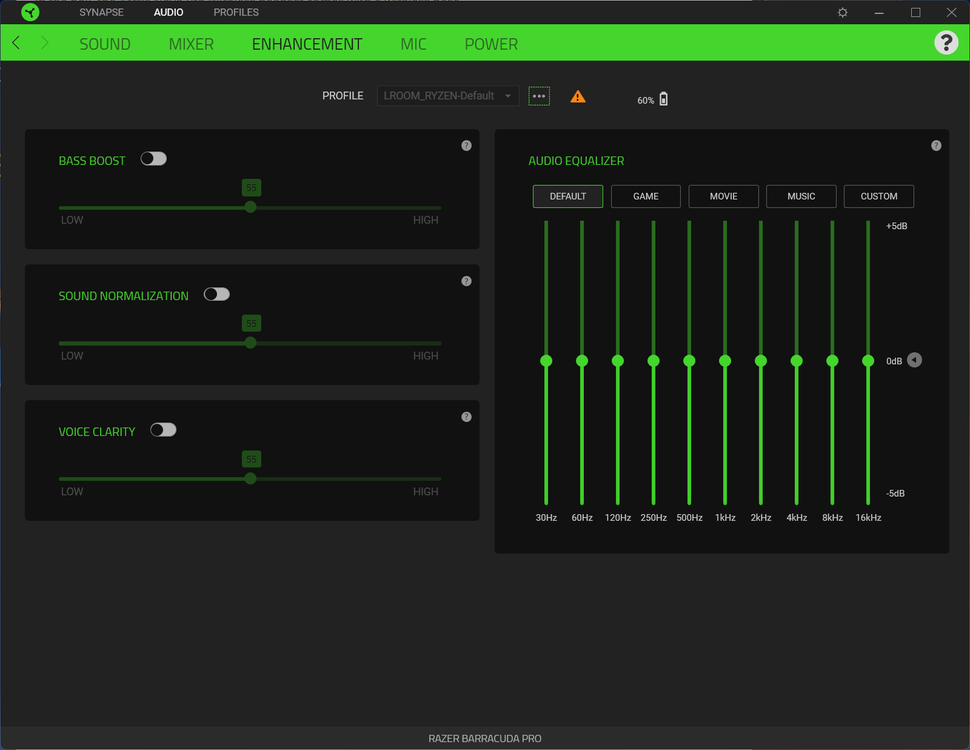 Microphones on the Razer Barracuda Pro

While the integrated mics may turn off some gamers looking for the best possible reproduction of your voice, I found the pair of beamforming noise-canceling mics to be very good, though not excellent. In calls, video chats and games, my colleagues and friends said I sounded good or had no complaints. And while outdoors the headset did a good job of minimizing wind noise that I could clearly hear on my end with my own ears.

The mics also made some rather loud construction noise going on across the street behind my desk basically disappear in my test recording, although the clicks and thocks from my mechanical keyboard and its Holy Panda X switches were very muted but still somewhat audible at the default settings. Digging into the Settings in Synapse, I noticed there was also a High setting for the mic’s noise canceling, which cut the sound of the switches out completely but left my voice sounding quite compressed. I think I’d live with a little keyboard noise for better overall mic fidelity, but it’s good to have options.

Speaking of options, Synapse also gives you a separate equalizer for the mic, as well as five presets and some other toggles and sliders. Again I thought the default settings were fine. In short, for most people, the mics on the Barracuda pro will be fine, whether you’re gaming or calling or chatting. But if you want the best sound pickup possible you should opt for a dedicated desktop microphone. 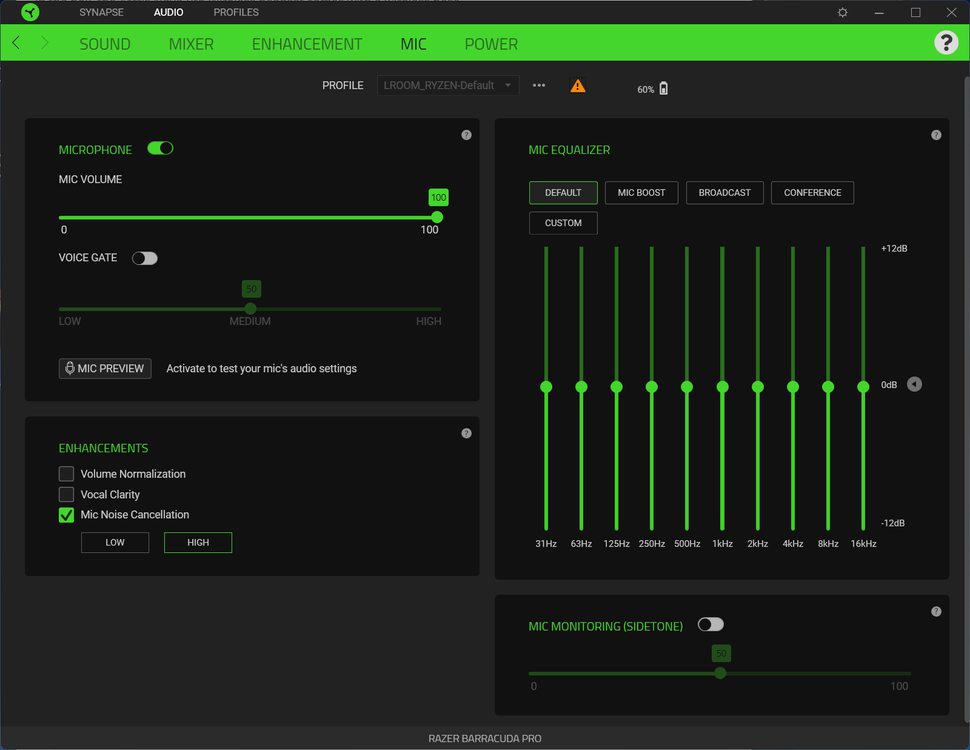 Razer rates the battery life of the Barracuda Pro at 40 hours. That’s not unheard of, but still quite good. I didn’t have enough time with the headset to run it down multiple times. But after 20 hours of heavy mixed use over two days, mostly with noise canceling on, the battery meter dropped just 24%. So either Razer’s longevity rating is quite conservative, or the meter in Synapse needs a charge cycle or two before it’s particularly accurate. 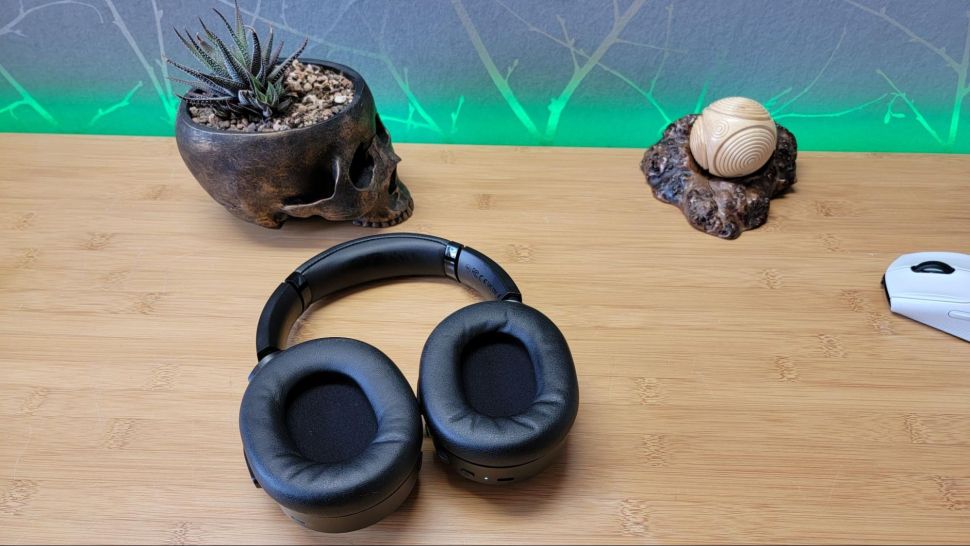 In terms of audio, the Razer Barracuda Pro is a very good headset for its $250 price, with good integrated mics and active noise canceling — although Sony and Bose do this better. It’s also very comfortable (though that can vary by head size) for long-term wearing and battery life seemed great in my limited time testing. Razer’s 40-hour rating may be quite conservative. And the included rigid zip-up carrying case is better than I’ve seen with some headphones that cost hundreds more.

But for a device from Razer, the overall design is boring and the plastic housing attracts smudges. I would love to see some metal used here, especially at this price. But the only metal used in the headset’s shell is the band. That’s disappointing because while the headset feels solid, most of the competition in this multi-device headset category (save for the Epos H3Pro) looks and feels more premium.

I do like that Razer has minimized its snake logo by making it black on the black earcups. But for a company that I often feel should tone down its design, Razer could have done more to make the Barracuda Pro look and feel exciting — or at least premium. The headset feels more like a Bose or Sony headset, which will be fine for some, but may not appeal to the gamers inclined to opt for this brand over those longer-lived competitors.

If you’re looking for a do-it-all headset for traveling, office work and gaming, the Barracuda Pro is a good option, particularly if you find sound and comfort most important and don’t want to spend more than $250. But serious gamers may want something edgier with a retractable or removable mic, and frequent travelers will find better noise canceling with the best that Sony has to offer on that front.