4K monitors with high refresh rates don’t come cheap… or do they? AOC’s U28G2XU gaming monitor brings a budget option to the table for anyone who’s managed to bag a high-end GPU that can handle UHD, but perhaps spent a little over the odds and now has to cut corners with their budgeting. It’s a commendable option for anyone looking to revel in high resolution gaming, but has a few small shortcomings that are sure to stump console players.

Out of the box, the AOC U28G2XU gaming monitor is a sight for science fiction writers—like a spacecraft panel right there on your desk. It’s 28 inches of antiglare, IPS panel housed in sharp, stylish design, complete with go-faster red flashes. The go-faster sentiment is a little on the wishful thinking side, particularly for console gamers—but we’ll get to that in a moment.

Most of the monitor’s weight is set close to the font, so just be sure the footprint will fit if you’re rocking a small monitor stand. I tried popping it on a box lid I found which was too small, with the feet sticking off the front, and the thing was so precariously weighted that a small jolt would have sent it crashing into my lap.

Compare it to something like the LG UltraGear 27GN950, right now sat at the top of our best 4K gaming monitors list, the AOC doesn’t match up in terms of brightness, and only comes rocking standard IPS panel tech (as opposed to Nano IPS). But it comes in at a much more reasonable price point.

For £569 you get the same resolution, response time, and double the USB passthrough ports.

The panel comes with Vesa’s DisplayHDR 400 certification—the lower end of the spectrum with less of a wide colour gamut than others, and devoid of local dimming. Essentially this helps keep the price down, but means the AOC U28G2XU isn’t the greatest for HDR. AOC’s choice to opt for dynamic contrast does mean it’ll try to adapt as it darkens to make up for the low contrast ratio IPS monitors like this tend toward, and does an alright job at it.

A little warning pops up asking if you mind consuming extra power for the privilege, but the contrast ratio tests proved acceptable, and the general contrast left each band of the Lagom contrast test well defined. The AOC U28G2XU’s gamma testing came back pretty spot on, and no complaints on the side of vibrance, either. The viewing angle is ever so impressive, too. All of which puts this monitor in a fantastic stance for the price, image quality wise.

But the console users are going to be the hardest to please here.

This monitor only offers HDMI 2.0 ports, which cap its refresh rate to 60Hz in 4K. DisplayPort 1.4 caps at 120Hz at the same resolution. While that’s not an issue for us PC gamers, as DisplayPort DSC (display stream compression) can push that up to 144Hz, console users will be stuck at 60Hz at UHD. 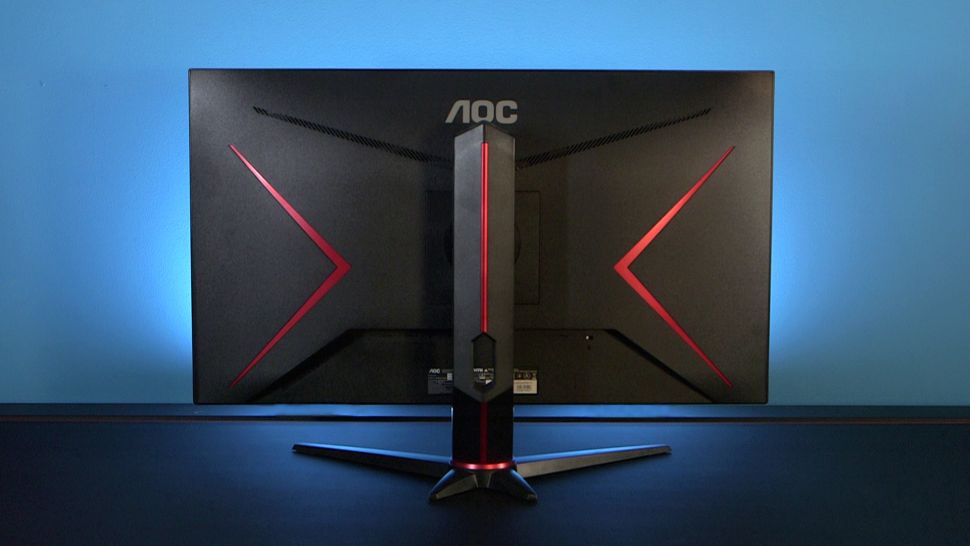 AMD users who want to reduce any screen tearing they might experience can use FreeSync with the AOC U28G2XU, but those packing an Nvidia GeForce GPU will be sorry to hear G-Sync is off the table, despite some retailers listing it as G-Sync compatible.

The Motion Blur Reduction (MBR) mode comes at the expense of adaptive sync, and it’ll also lock your brightness depending on the level used. MBR can help you get rid of some motion blur, but isn’t super effective at its job. It’s one feature that’s worth leaving off so you can make the most of adaptive sync. Get your low input lag mode on along with that, and you’ll be laughing. While it’s not an absolute top-tier response time grey-to-grey, it’s more than acceptable for most in competitive gaming.

There were some issues with overdrive mode worth noting. I found inverse ghosting occurred increasingly as I moved up through the higher overdrive settings.

Overdrive boost mode was the worst culprit, but with medium settings enabled I found it to be totally playable.

Despite all these little trip-ups, you’re still getting a 4K monitor that covers all the competitive gaming basics for one of the best prices on the market today. The lack of G-Sync compatibility does let it down for Nvidia GeForce users, but the AOC U28G2XU is still well worth the money. Each tiny gripe, such as HDR performance and overdrive ghosting are easily overlooked when you consider the speed, resolution, and image quality of this panel.

Sadly, it only looks to be available in the UK and Europe right now, however