When they first arrived on the scene, OLED panels were something of a unicorn. The technology was proven, but low manufacturing yields kept them from entering the consumer mainstream. OLED panels are still a premium product today, but prices have come down to a more approachable level. OLED phones are commonplace, but desktop monitors are not. You can buy a 48-inch screen like Aorus’ FO48U, but is that truly a desktop display?

The AW3423DFW introduces a new OLED variant to the mix, QD-OLED, where the QD stands for Quantum Dot. You’ve likely heard of that tech associated with LCD panels. Quantum Dots are dots made from a light-emitting substance printed on a layer of film. It can be placed over the backlight of an LCD or sandwiched in front of an OLED array. When the dots are excited by light energy, they emit their own colors. This widens the display’s color gamut and increases its total light output. The result is a good thing for OLED, because it has lagged behind LCD in the peak output metric for years.

The AW3423DFW has a bit more color than the average OLED panel. Where most cover between 90 and 95% of DCI-P3, the Alienware AW3423DFW fills over 107%. It also delivers plenty of brightness. In HDR mode, it can hit 1,000 nits when rendering small highlights. It’s far brighter than the 55-inch AW5520QF I reviewed in 2019. More light means greater dynamic range. OLED panels already deliver the blackest blacks of any display technology. A higher peak number just means an even better picture.

The AW3423DWF’s gaming performance received equal attention. The max refresh rate is 165 Hz, and both AMD FreeSync and Nvidia G-Sync are supported. It also sports a claimed 0.1 ms response time. My measurements showed the same performance as other 165 Hz screens, but during practical observation, I noted that it looked smoother than an LCD panel running at the same speed. It’s visually comparable to a 240 Hz display, which means it’s making more of the same frame rate.

Of course, the curvature and the 21:9 aspect ratio also enhance the gaming experience. An 1800R radius strikes a good balance between immersion, of which there is plenty, and image distortion, of which there is none. The AW3423DWF is as well suited for work as it is for entertainment. Some gamers will appreciate the AlienVision feature that highlights the center of the screen for sniping. In addition, photographers will appreciate its color accuracy, which is factory certified. During my tests, I found no need for calibration. And there is a Creator mode, which lets the user choose between DCI-P3 and sRGB color gamuts.

Alienware, like its parent company Dell, ships its monitors in sustainable packaging where most of it is recyclable. Rather than crumbly foam, the contents are protected by molded cardboard pulp with bits of flexible foam placed in just a few important spots. The stand and base bolt together, then the panel snaps to it. Two DisplayPort cables are included, one DP-to-DP and one DP-to-USB-C. You also get USB and an IEC power cord for the internal power supply. A large cover snaps onto the back of the panel to hide the inputs. Cables can be routed through the stand and out the back of the base. 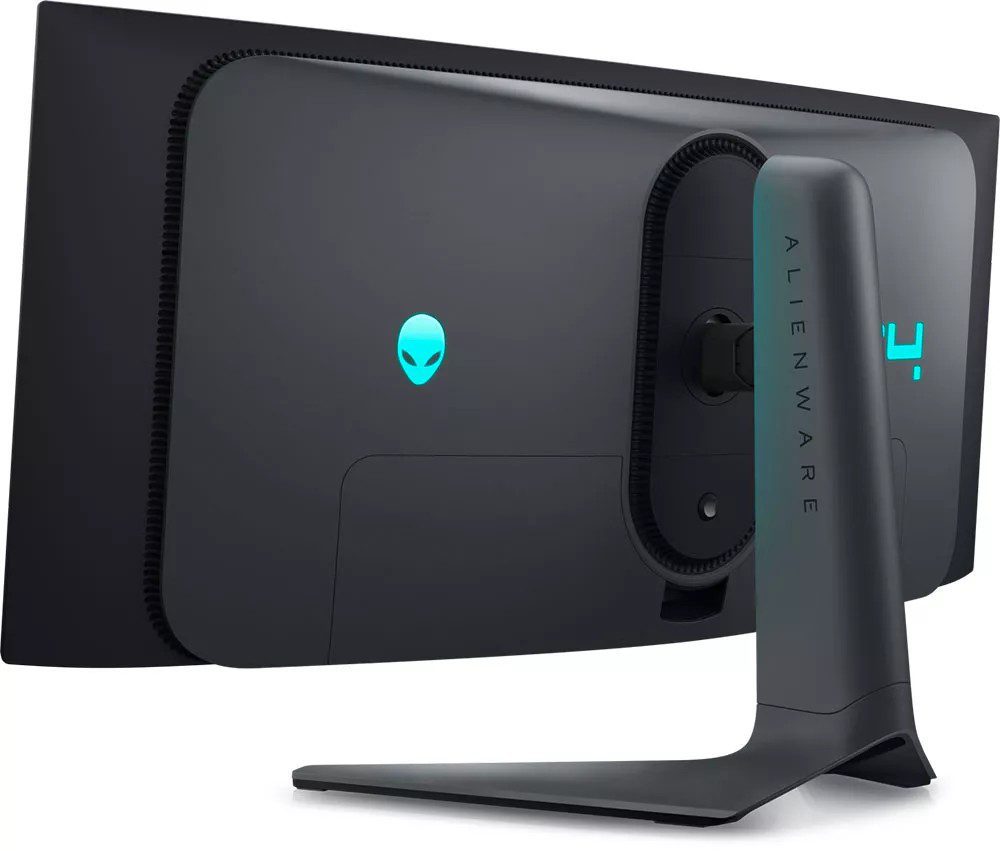 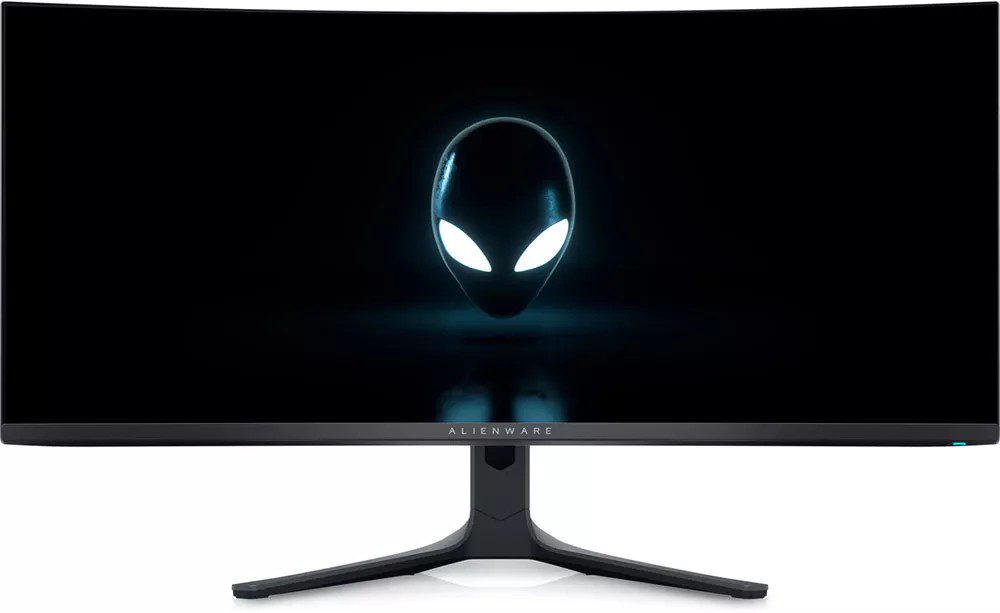 From the front, the AW3423DWF is all screen with a very thin bezel that’s flush-mounted. Alienware is printed at the bottom, and you can see the power button/LED at the lower right. The color and effect can be controlled in the OSD, along with two logos on the back. You can choose any color of the rainbow or cycle through the full spectrum. Or turn everything off for a stealth look.

The stand is very deep and rock solid. You’ll need nearly 15 inches of desktop space to accommodate the base. Ergonomics include -5/21 degrees tilt, 20 degrees swivel and a 110mm height adjustment. You can’t rotate the panel to portrait mode, but 5 degrees of slant is built-in, ostensibly to accommodate desktops that aren’t level.

You can see a component bulge in the back surrounded by a grill that effectively vents the small amount of heat generated by the AW3423DWF. The Alien head and size designator, 34 in this case, are lit up to let your opponents know what display you’re using to defeat them. Under the input panel cover, you’ll find two DisplayPort 1.4 inputs and a single HDMI 2.0. Those decrying the lack of 2.1 will note that 2.0 accommodates gaming consoles that support the 16:9 aspect ratio at 120 Hz, which means only 2560×1440 pixels. Console users will see black bars on either side of the image while playing, and you’ll need to use DisplayPort for the full 3440×1440 at 165 Hz. Peripherals are supported by five USB 3.2 ports, one upstream and four down. Two of them are underneath the front bezel, which is a nice convenience. The headphone jack is also found there near the OSD joystick. 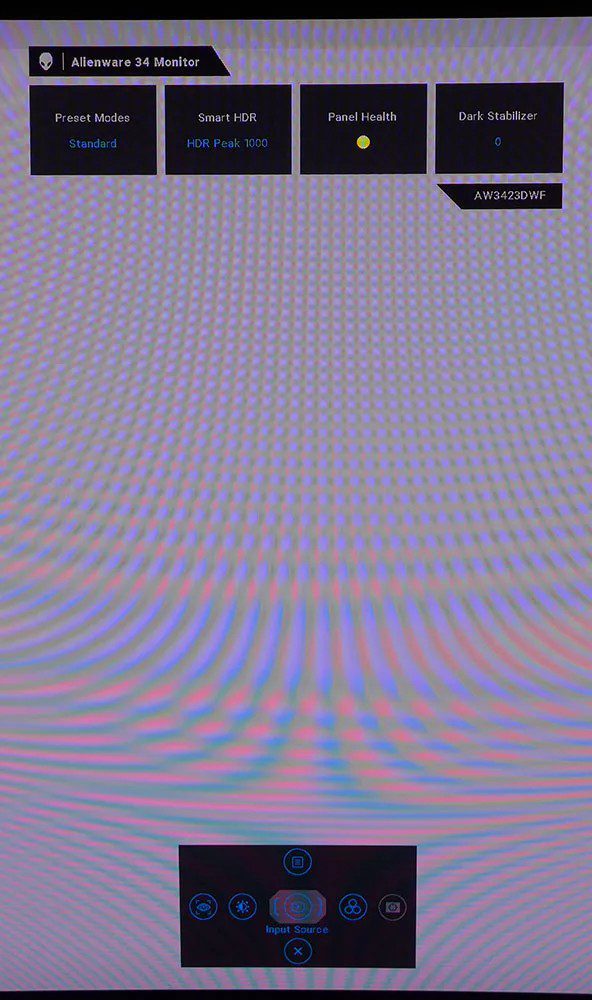 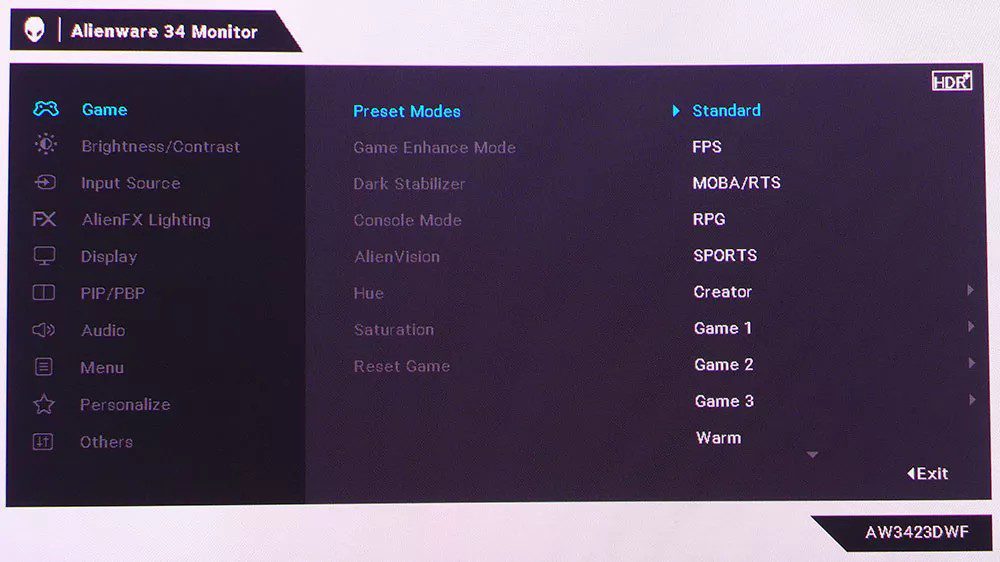 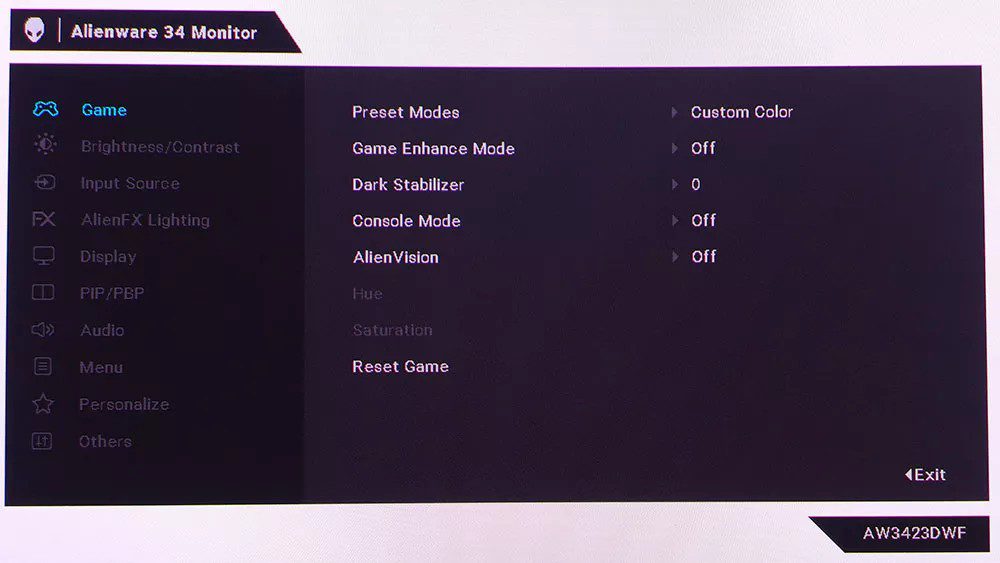 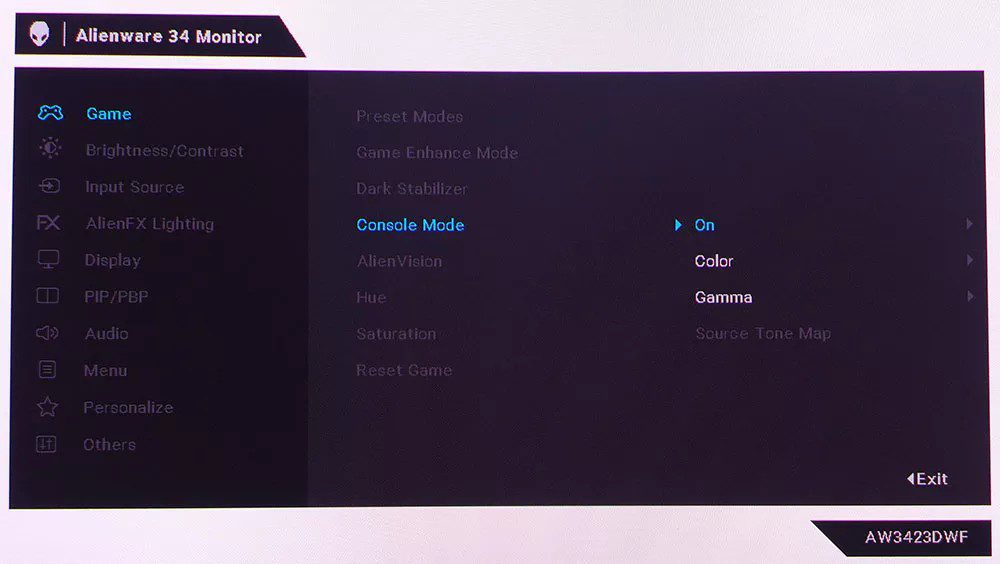 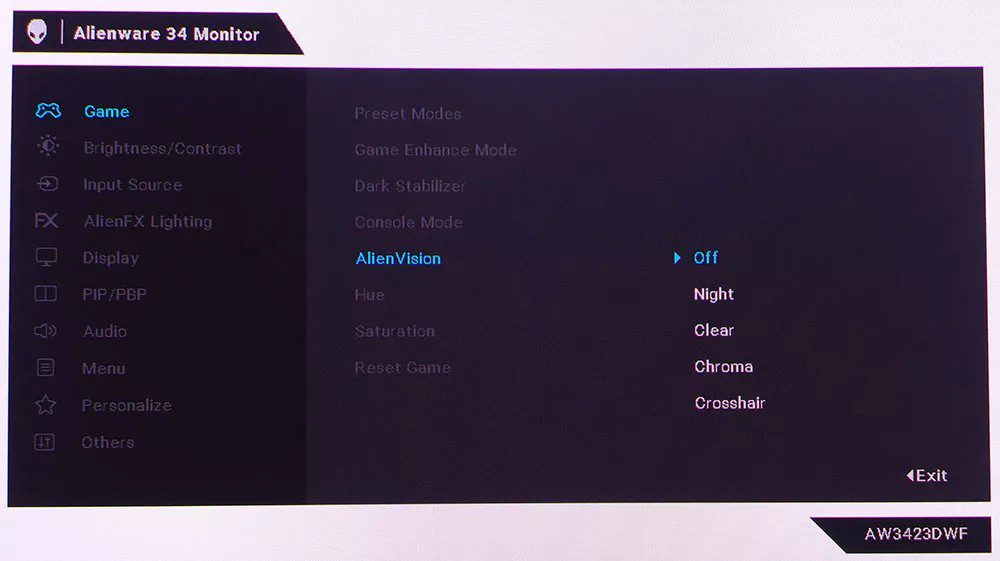 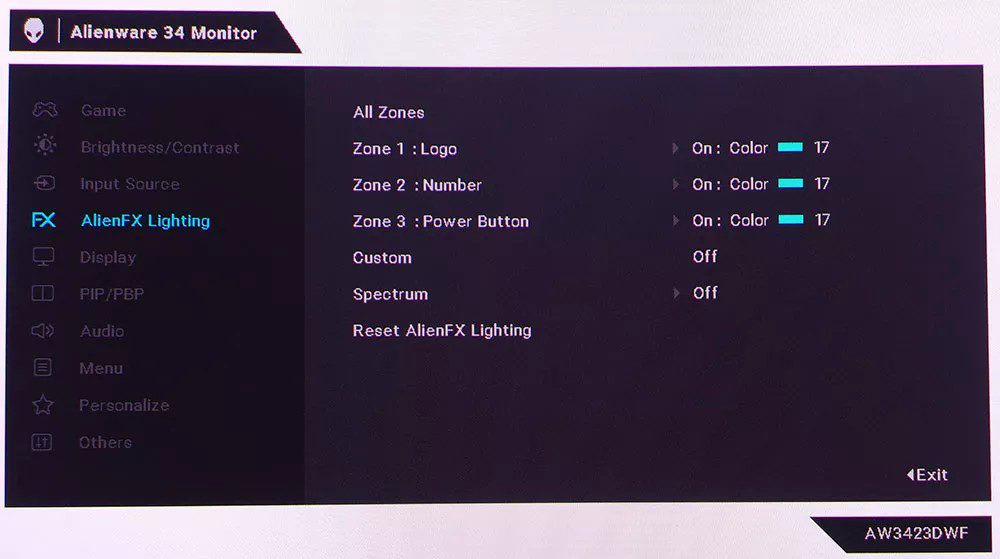 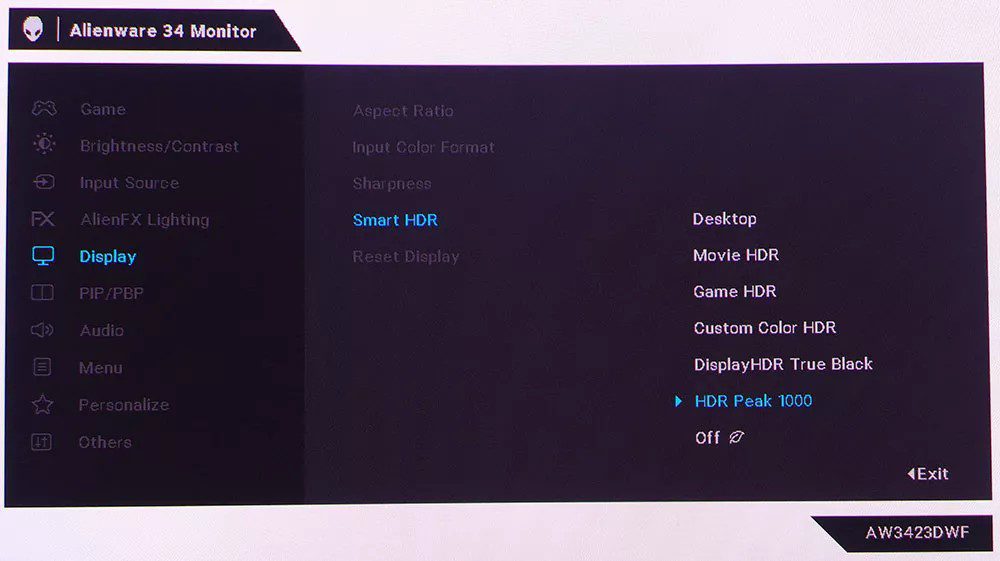 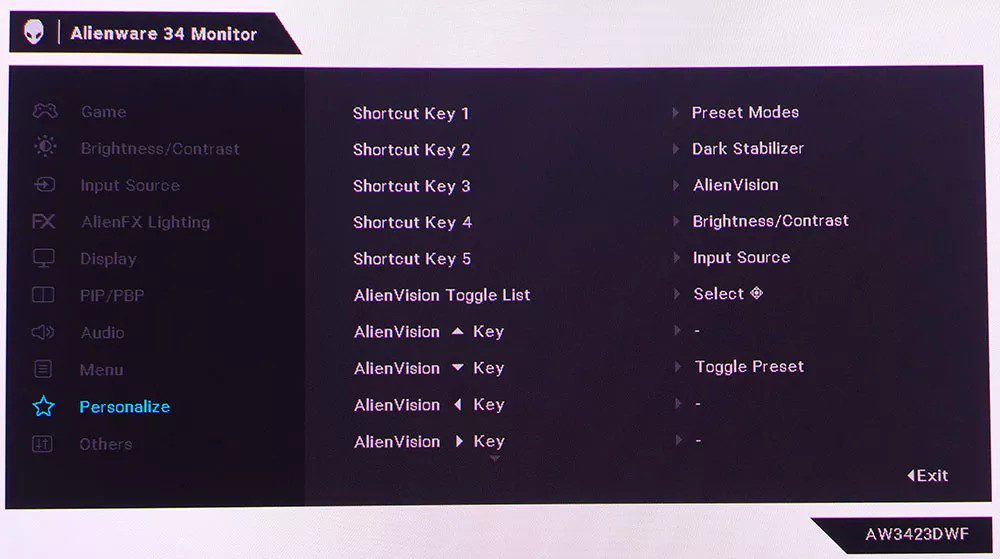 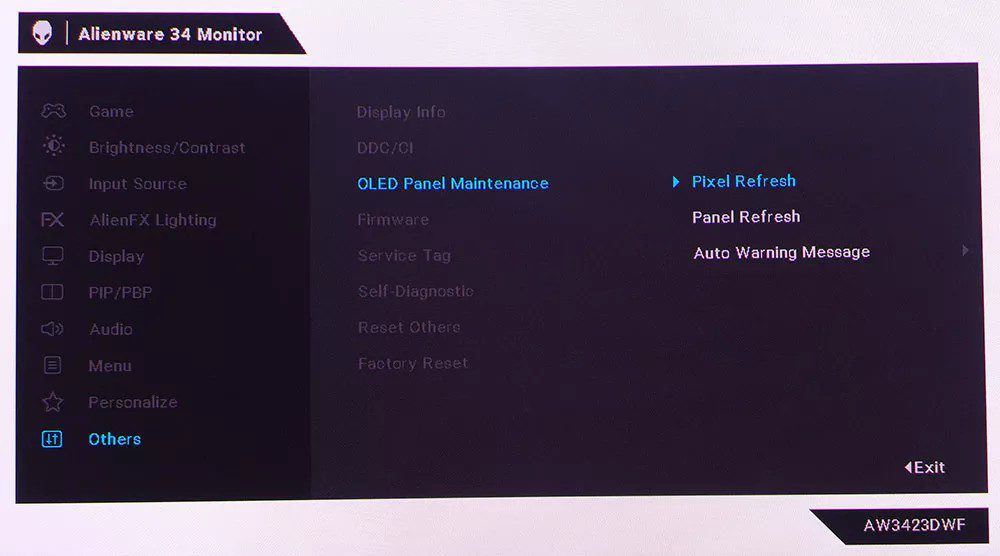 Pressing the joystick once brings up a quick menu at the bottom and a status bar at the top of the screen. The panel health meter shows green, yellow or red based on how long it’s been since the panel or pixel refresh functions were last used. The quick menu gives access to picture mode AlienVision options, inputs, dark stabilizer and brightness/contrast.

There are 12 total SDR presets, of which Standard is the default. It’s very accurate and doesn’t need further adjustment if you’re OK with the full color gamut. For sRGB, engage the Creator mode, where you can choose a gamut and change the gamma. The Game modes add RGB sliders and game presets to the mix. Or scroll to the end for Custom Color where you can adjust RGB gain and bias controls plus hue and saturation sliders for all six colors.

Turning on Console mode lets one adjust hue & saturation plus gamma. In HDR mode, those options are grayed out, and you can toggle Source Tone Map, which uses the source signal’s metadata to set the tone-map transition point. This serves to enhance highlight detail.

AlienVision is a gaming aid that highlights the center of the screen. Or you can display the largest crosshair ever if you need help aiming. It’s a green cross that’s nearly four inches square.

AlienFX Lighting refers to the power LED, Alien head and number logo on the back of the panel. You can light them individually in any color or intensity. Choosing Spectrum cycles through all colors in a mesmerizing display.

In HDR mode, you can pick from six modes. For the best accuracy and greatest dynamic range, choose True Black. If you want the brightest possible highlights, go for HDR Peak 1000. The other presets are less impactful. My preference was True Black, as it shows off OLED’s capabilities to the fullest. And it’s plenty bright enough even in my sunlit office.

The joystick directions can be customized to provide quick access to the AlienVision options. You can also specify the functions of the quick menu.

To maintain a healthy panel, the AW3423DWF includes both pixel and panel refresh options. Both can run when the monitor is on standby. Once you’ve set these options, they’ll run only when you’re not using the display. I’ve used a similar routine with my two-year-old LG television, and I can attest to its effectiveness. There is no burn-in whatsoever.

As a computer monitor, the AW3423DWF has few, if any, equals. The picture quality is simply on another level from any LCD panel I’ve experienced. It’s truly addictive, and once you’ve seen it, you won’t want to go back. Depth and dimension are so realistic, it is, to use the old cliché, like looking out a window. And that feeling includes high-res renderings too. Even when looking at monsters and fantasy environments, the texture is so convincing you’ll find yourself reaching out to touch things like stone or metal.

I saw a perfect example when playing Doom Eternal. Looking down at a stack of shotgun shells, I was struck by the metal end caps, which had just a bit of corrosion. Then I looked up at the gun barrel and marveled at how its shiny surface reflected the environment around me. Parts of it were like a mirror, and I saw every detail.

That detail stayed sharp when moving as well. Though I’ve had many positive experiences playing on 240 and 360 Hz monitors, the AW3423DWF’s 165 Hz is nearly equal in its motion processing. Fast side-to-side camera pans stayed in focus no matter how quickly I moved the mouse. This made it far easier to maintain my aim and to keep my viewpoint locked on where it needed to be. I saw frame rates between 150 and 165 from a GeForce RTX 3090-equipped PC. Even the best LCD with perfect overdrive can’t duplicate this look.

The curvature certainly contributed to the fun I had. You can get a lot of immersion from a large flat panel like the Aorus FO48U, but a curved ultra-wide, especially one with the contrast and color saturation of the AW3423DWF, conforms better to one’s peripheral vision. The curve keeps the entire image in focus with almost no head-turning required.

You’ll want to seek out HDR games whenever possible because that is what this monitor does best. Its SDR image looks great for older titles like Tomb Raider, but once HDR is turned on, you won’t want to turn it off. There was no performance hit or penalty for playing in HDR versus SDR. Adaptive-Sync always worked perfectly, and control lag was perceptually non-existent.

As a workday tool, the AW3423DWF serves well. The curve doesn’t distract when editing documents, and there is no image distortion. Spreadsheets are easier to deal with as you don’t have to scroll side to side as much. Word processing benefits from the easy ability to place two documents next to each other in full-page view. Photoshop can be set up to keep the graphic centered with tool palettes on either side. Or use the PBP function to view two sources at once.

The AW3423DFW is an absolute pleasure to use for work or play. It excelled at everything I did and is a completely addictive gaming display.