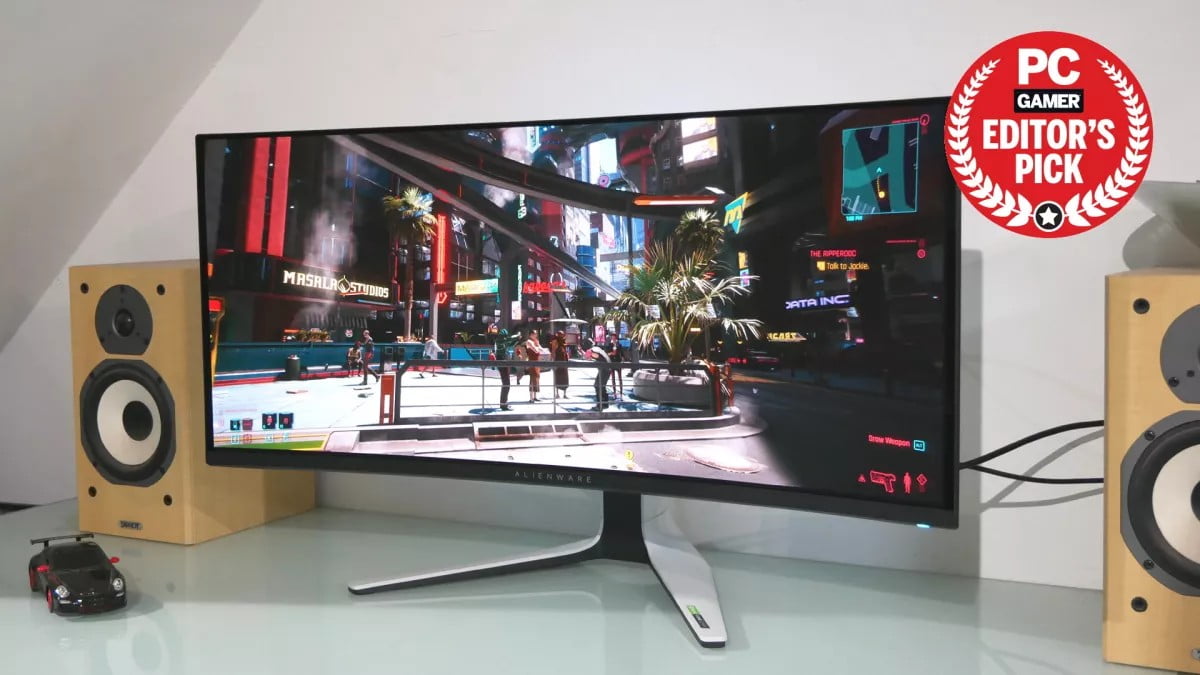 -Not a great all-purpose panel
-Latency isn't a strong point
-No HDMI 2.1

Is this where it all begins? Is the new Alienware 34 AW3423DW QD-OLED the gaming monitor that sparks an OLED revolution on the PC? The one we’ve been waiting years for? Please, please, let it be so.

As you’ll see, this monitor isn’t perfect. But it is dramatically better than any LCD-based monitor by several gaming-critical metrics. And it’s a genuine thrill to use. Of course, that’s getting ahead of ourselves. First, we need to cover off the basics.

By many measures, this isn’t really a radical display. The 34-inch 21:9 proportions, the gentle 1800R curve and the 3,440 by 1,440 native resolution are all relatively routine in the current gaming monitor market. Ditto the 175Hz refresh rate. It’s no slouch, this new OLED panel, but there are LCD screens with much higher refresh rates available for far less cash.

Ah yes, the sordid matter of money. The AW3423DW weighs in at $1,299 in the US (UK pricing hasn’t landed yet). Depending on how you slice it, that’s either a tonne of cash for a gaming monitor or surprisingly reasonable for something at the vanguard of new technology. After all, this is the first true PC gaming panel based on OLED technology.

And not just any old OLED kit. Many OLED TVs, including the LG sets that have become so popular among gamers, use WRGB subpixel substructure to boost brightness at the cost of diluting colour saturation. WRGB can also be problematic for PC applications that assume an RGB subpixel structure for fine control of rendering, including for fonts. That problem isn’t really relevant for gaming. But the bottom line is that WRGB OLED panels come with downsides.

That’s why this new Alienware is doubly exciting. Not only is it OLED, it’s also Samsung’s hot new QD-LED tech, which combines the ideal RGB subpixel structure with quantum dot technology to produce both excellent colour saturation and an even brighter panel. Net result? Alienware is claiming both an impressive 99.3 percent coverage of the demanding DCI-P3 colour space and fully 1,000 nits brightness, albeit that brightness level can only be achieved on a small portion of the panel, not across the entire screen.

Common to all OLED tech are two critical advantages over any LCD panel, namely contrast and response. Put simply, every pixel in an OLED panel is its own light source, which can be turned completely off, essentially delivering ‘true’ black levels and more or less infinite contrast. There’s no need for any of that complicated, problematic local dimming to stop the light from leaking through an LCD panel. OLED is the real HDR deal.

OLED is also far faster than LCD. By how much depends on how you measure things. The fastest current IPS monitors are quoted at around 1ms for grey-to-grey response. But that only measures part of the transition between colours.

The full change takes much longer. By comparison, Alienware is quoting this OLED panel at 0.1ms. And that’s likely for the full transition. It’s at least an order of magnitude faster. 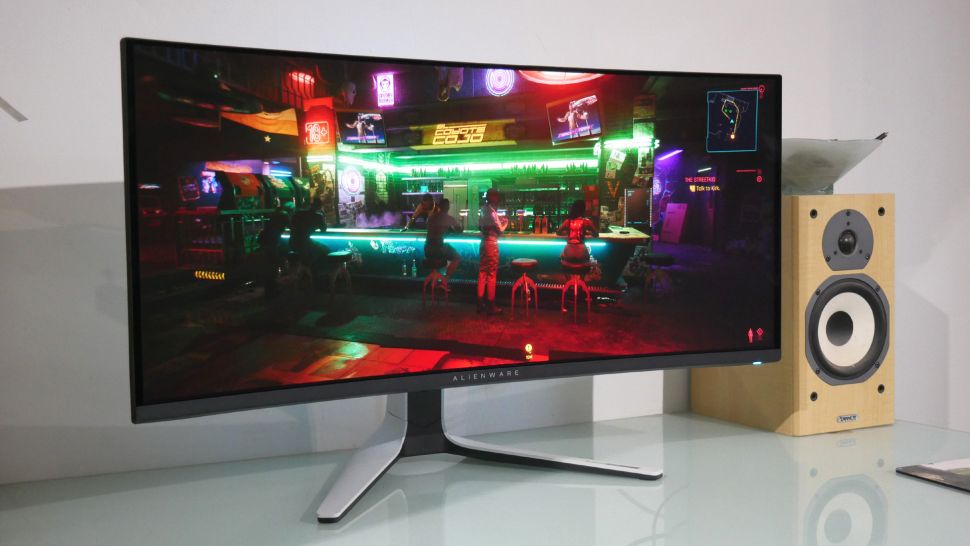 Anyway, if that’s a quick refresher as to why this thing promises to be so good, what is it actually like? First impressions are actually disappointing. Fired up in SDR mode, the Alienware 34 AW3423DW QD-OLED looks a little dull and dingy. What happened to that 1,000 nits claim? Then there’s the mediocre pixel density that comes as a consequence of the combination of 34-inch diagonal and 3,440 by 1,440 native resolution. Oh the horror, is this thing a dud?

Don’t panic. Unlike LCD monitors with claimed HDR capability, this OLED screen needs to be in HDR mode to do its thing. And that applies to SDR content, too. Alienware has provided two HDR modes, HDR 400 True Black and HDR Peak 1000. The latter enables that maximum 1,000 nit performance in small areas of the panel but actually looks less vibrant and punchy most of the time.

Instead, it’s the HDR 400 True Black mode that generally gives the best results. That includes SDR content. For SDR content to look its best, you have to jump into the Windows Display Settings menu and crank the SDR brightness up, after which it’s much more zingy all around. That’s actually handy because it means that once you have the AW3423DW set up properly, you’re all done. There’s no need to switch modes for SDR and HDR content.

But let’s get back to gaming. Boy, this is a special display. In response terms, it’s incredible. No matter how violently you tear your mouse across the mat, everything on-screen stays so crisp and clear and sharp. That incredible in-game response is backed up by test animations like TestUFO. We’ve never seen the little alien spacecraft look so blur-free. Comparison of the blur-free UFO on the Alienware AW3423DW versus a standard IPS panel.

As for the colours and contrast, this panel is the absolute bomb. There’s so much depth, saturation and clarity to the in-game image thanks to that per-pixel lighting. All of a sudden, every LCD monitor ever seems like you’re looking through a filter, like they’re all just a tiny bit watery and translucent.

Want examples? With many supposedly HDR-capable panels, Cyberpunk 2077 actually looks best in SDR mode. Not with this Alienware. In HDR mode, shafts of sunlight positively pop in outdoor scenes, while the deep, inky blacks contrast dramatically with neon light sources indoors. It really is something special.

Heck, even typically underwhelming titles—in visual terms—like Call of Duty: Warzone look great thanks to the quantum dot-enhanced saturation and speedy response. The slight softening of the image that you have to put up with pretty much any LCD panel when flying around maps in online shooters and other fast-paced games simply isn’t there.

If all this sounds a little hyperbolic, it doesn’t actually mean that all LCD monitors are now awful. In fact, when it comes to refresh rates and therefore latency, LCD monitors with 360Hz-plus refresh are clearly quicker. Latency is traditionally a weak point for OLED, and while we didn’t sense any subjective issue with this 175Hz monitor, there’s little doubt that if your gaming fun and success hinges on having the lowest possible latency, there are faster screens available.

Latency isn’t the only OLED-related issue, of course. Burn-in is the great fear and that leads to a few quirks. For starters, you’ll occasionally notice the entire image shifting by a pixel or two. The panel is actually overprovisioned with pixels by about 20 in both axes, providing plenty of leeway. It’s a little like the overprovisioning of memory cells in an SSD and it allows Alienware to prevent static elements from “burning” into the display over time.

The other anti-burn-in measure is an ABL (Automatic Brightness Limiter) system. Look carefully, and you’ll see the overall panel brightness varying a little in response to what’s on the screen. A large bright object, for instance, will cause the panel to dim slightly in order to control overall power consumption and protect the panel. It’s not terribly intrusive, but it is something to be aware of. Alienware reassuringly provides three-year cover for the risk of OLED burn-in.

If time will tell if that ever proves a significant problem, what we can say for sure, at this price point, is that there are better general-purpose panels with superior pixel density, higher resolution, and more desktop screen real-estate. The lack of USB-C connectivity is also a limitation for broader usability. If you want a really large display, a 120Hz OLED TV for similar money is likewise clearly better value.

What’s more, it’s worth noting you can only achieve the full 175Hz with the single DisplayPort input. The two HDMI sockets are limited to 100Hz. It’s just one of the reasons why this thing ain’t a great choice for pairing with the latest games consoles. It’s really only optimised for use with a PC. But for most types of gaming on that very platform, this is as good as it currently gets. Put simply, the Alienware 34 AW3423DW sets new standards for contrast, HDR performance and response.