Home » The most exciting monitors still coming in 2022
Misc

The most exciting monitors still coming in 2022

The most exciting monitors still coming in 2022

If you’re a gamer who likes fast-paced titles, such as Counter-Strike: Global Offensive or PUBG, you might appreciate monitors with a high refresh rate. As a refresh rate of 144Hz continues to climb in popularity even in budget monitors, there are also faster screens to choose from, all the way up to 360Hz. That number is about to change drastically, however, because Asus has just announced the world’s-first 500Hz monitor.

This is a 24.1-inch Full HD monitor set to release at an undetermined time later this year. Asus refers to it as “the new benchmark in esports,” and it very well might be, because it will focus on the refresh rates as opposed to the visuals.

Asus used a panel called “esports TN (E-TN)” in this display, and the manufacturer promises that it should be able to deliver up to 60% faster response times than standard TN displays. While the monitor won’t deliver the beautiful, vibrant visuals of an IPS panel, it’s going to be super-speedy — which is exactly what these games need.

How much will it cost? Good question — Asus hasn’t spilled the beans on that just yet. The company’s Buy at Amazon right now, but you shouldn’t expect to get the 500Hz model that cheap. It’s a world’s first and it’s certainly being made for enthusiasts, so add a few hundred dollars extra on top of that price tag. 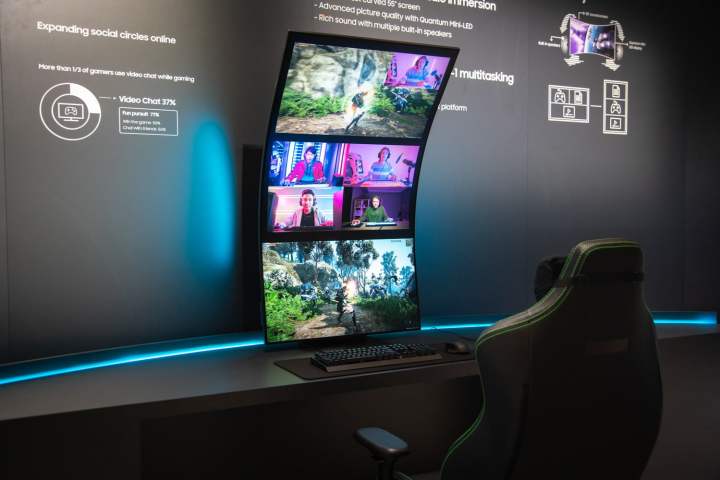 There’s gaming on a large screen, and then there’s Samsung ARK. It looks like something that has just been pulled out of Star Wars, but it is, in fact, a 55-inch monitor that we were introduced to during CES 2022. Aside from being absolutely enormous, curved, and beautiful, it comes with a special quality that most monitors can’t boast about — it rotates vertically. You can use it as your typical 16:9 curved monitor (albeit very oversized) or you can rotate it into cockpit mode to stack several applications on top of each other, as shown in the photograph above.

Samsung’s demo of the display shows three separate 16:9 feeds in vertical mode. Those same feeds can look entirely different in horizontal mode, with two smaller apps up top and the bottom half of the screen being taken up by a game played in ultrawide mode. It’s stunning, and although many of us won’t find a use for this monitor, it’s certainly going to shine for those who need extra productivity. Streamers, Microsoft Flight Simulator fanatics, and various professionals in need of a massive productivity-oriented screen will probably be eyeing this monitor whenever it finally hits the shelves.

In terms of specs, we mostly have rumors to go by right now, and they’re all encouraging. The display is said to have a 1000R curvature and a quantum mini LED panel, as well as a 165Hz refresh rate. Both the release date and the price remain unknown right now. The price tag is likely to be a little bit outrageous, but this is not the kind of monitor one buys when on a tight budget. 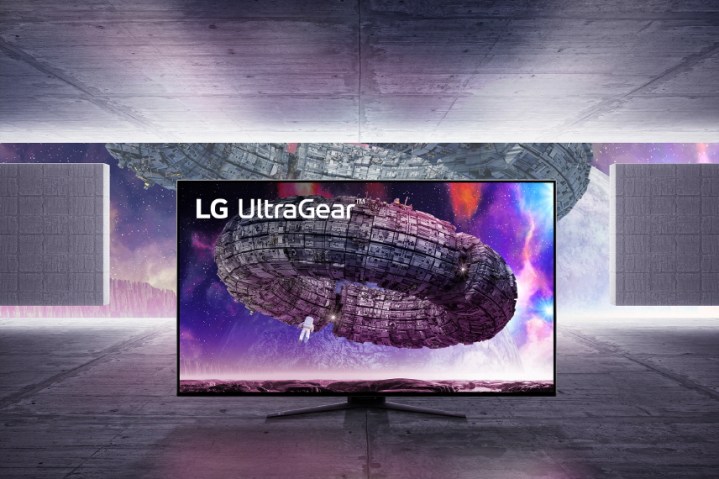 Samsung ARK is certainly a unique display, but if you’re more of a fan of traditional designs, LG has its own OLED beauty in the works. Dubbed the LG UltraGear 48GQ900, it marks a first for the brand in terms of OLED gaming displays.

Three new LG gaming monitors are expected to arrive at some point soon: The 32GQ950 and the 32GQ850, both with a Nano IPS panel, and the 48GQ900. However, the one that really piqued our interest is the 48-inch UltraGear, made for gamers who love a huge screen. The OLED panel should ensure that LG’s new release is capable of taking gaming immersion to the next level. Expect stunning visuals, perfect for playing AAA games that can deliver graphics worthy of a monitor such as this.

It often feels like many of the largest 4K gaming monitors are simply TVs in disguise, but LG geared this one up with a solid refresh rate (120Hz to 138Hz), a 0.1-millisecond response time, and variable refresh rates (VRR), HDMI 2.0, and Nvidia G-Sync and AMD FreeSync support.

The two remaining question marks are the exact release date and the pricing. LG makes it clear that this new UltraGear model will be released in 2022. Japan gets it first, starting this month, and other key markets are to follow (presumably) soon. The pricing is hard to gauge, but seeing as this gaming monitor has the potential to offer a bit of everything — true-to-life colors, decent refresh rates, and massive size — it likely won’t come cheap. For comparison, the Buy at Amazon 48-inch OLED gaming monitor costs $1,000 right now, so expect something in a similar range.

LG and MSI both unveiled new gaming monitors during Computex 2022 … or, at the very least, LG has. MSI’s reveal has been very stealthy, but there is, indeed, a new MSI MEG 342C QD-OLED monitor coming up.

While LG was quite thorough in its announcement of its upcoming range and only failed to mention the pricing, MSI went with a minimalist approach. It simply showed a  picture of the monitor, all the while talking about several other hardware releases with no mention of the display. However, a few things can be pieced together even with so little to go on.

The MSI MEG 32-inch QD-OLED monitor has a quantum-dot OLED panel. It will likely feature a 3440 x 1440 resolution, a 175Hz refresh rate, and a curvature of 1800R. As of right now, MSI’s new gem is only the second QD-OLED display, which is why it’s so weird that the company hasn’t announced it with more fanfare. In any case, if you don’t want to wait for an undetermined amount of time for MSI, you can always pick up the ever-so-popular Alienware 34 QD-OLED, which we absolutely loved — if you can manage to find one in stock.

There is little doubt that MSI MEG will offer gorgeous visuals once it does come out. QD-OLED promises vibrant colors, dark blacks, and deep contrasts. No release date has been mentioned as of yet, and as for the price, we’ll leave you with a ballpark — Alienware 34, the only other QD-OLED gaming monitor on the market, sells for $1,400.

Apple is not a big player on the external monitor scene, but it does have something to add to the mix: The recent Studio Display and the ultra-expensive Pro Display XDR. Both of these monitors are aimed at creatives and professionals, so the $1,600 to $1,900 price tag for the Studio Display and the $5,000 to $6,000 for the Pro Display XDR are going to be overwhelming to casual users. Be that as it may, all signs point to Apple wanting to continue down this path.

While the new Apple release is still steeped in mystery, the rumor mill is buzzing with speculation about a possible Apple Studio Display Pro as a follow-up to the monitor released earlier this year. However, Apple could also take things in a different direction and focus on its high-end customers by releasing a new Pro Display XDR. We’re likely to hear more about this mysterious monitor during the Apple Worldwide Developers Conference (WWDC) in early June.

The latest leaks point toward Apple working on a new Pro Display XDR, and this time around, it could bump up the resolution from 6K to 7K. There has been a lot of talk about the company possibly using mini-LEDs in the new monitor. This would make it even more attractive to creative professionals thanks to the high contrast, sharp and accurate colors, and boosted brightness that are associated with mini-LED technology.

Whether the next Apple monitor will be the successor to the Studio Display or the Pro Display XDR, it’s almost bound to be expensive, beautiful, and by all current accounts, available later this year.