For years, DXRacer has been making its own brand of gaming chairs in various designs and still is the most identifiable brand on the market. However, as time has gone on, other brands have come into the marketplace with their own visions and designs, many of whom have improved on things based on gamer feedback and the changing of materials. DXRacer has changed too, but the majority of its products look relatively the same as they were when the company was first starting up. Which became the focal point of criticism online when others surpassed them in key areas. To combat that, the company released a new design which they called the Air Mesh Gaming Chair. Designed to be a more professional version of previous models for both gamer and home use. We were sent one a short time ago to check out and here’s what we found. 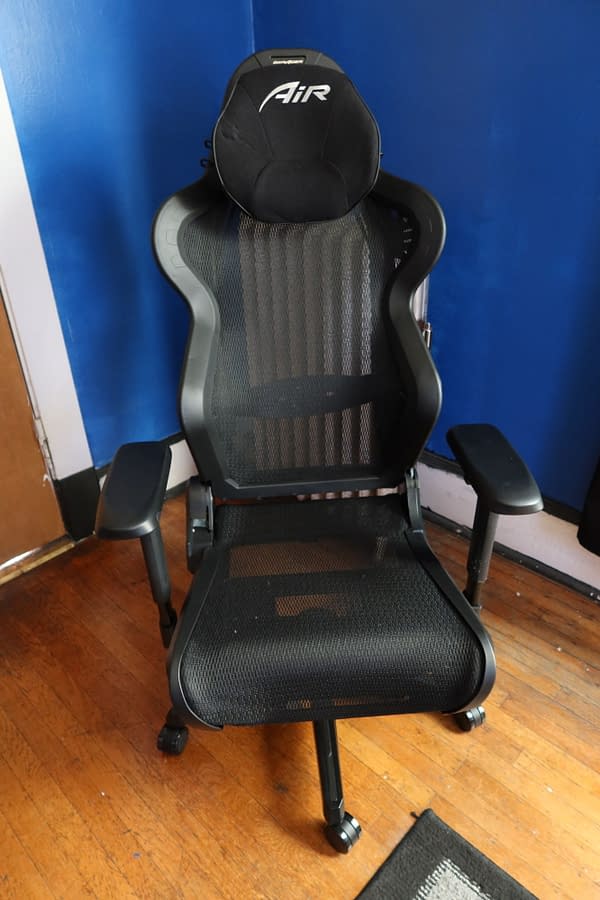 So for starters, let’s look at the design of this in both the frame and materials. This is clearly crafted to compete on multiple levels with office chairs from companies like Herman Miller, who are basically still the end-all-be-all of professional office designs. But it’s also been created to match the aesthetic and feel of gaming chairs from companies like Secretlab, AndaSeat, and Noblechairs. The backing of this was made from a breathable mesh upholstery that’s designed to provide support while also being flexible and allowing your body to sink in. There’s also a lumbar support bar that has been placed inside a rail system that allows you to move it up and down as you see fit. There’s no padding to this, it’s simply a plastic bar. However, after long use of this while reviewing it, there wasn’t any discomfort from using it either. 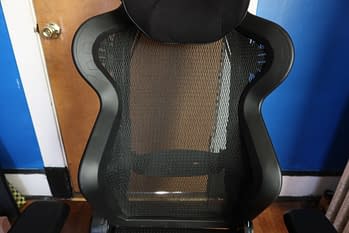 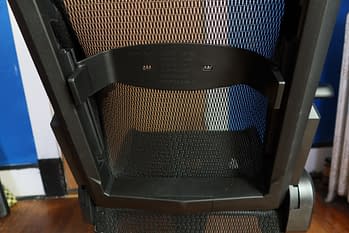 The top of the chair has an adjustable headrest complete with its own memory foam pillow. The pillow (with that DXRacer Air logo blazed across the top) is probably one of the most comfortable pillows we’ve ever had in a gaming chair as it isn’t simply a block that straps to the top, but is a sculpted piece that you can rest your head in automatically and allow it to shape as you rest on it. The one drawback to it is that it’s held in place by a small set of twisted screws, so if you want to make it go up and down, you have to go around and unlock them all to then adjust where you want it. On the plus side, once it’s locked in, it won’t slide up and down like others that are strapped on, so it always stays where you want it.

The seating has the same mesh material as the back, however, it’s a much-more woven texture than before. Which you want since you’re going to be sitting in it for hours on end at work or at play. The design was interesting as I didn’t feel like I was in this kind of a seat for a good period of time. It felt like I was gaming in a comfy and more sophisticated lawn chair, which isn’t a bad thing by any means. But it did prevent me from sitting in any super thin material for any extended length of time like my boxers. Not to say you can’t, but physically and visually, you’ll notice the print on your backside.

The DXRacer Air Mesh Gaming Chair comes with the usual ability to adjust the height, arc, and tilt as every other chair on the market does. That is probably the one thing about it that isn’t special or remarkable as its the same kind of controls as their own chairs have. Only with a different design of controls and levers when you reach down to adjust.

The one thing that is different is the armrest as they have streamlined their own take on it to give you a 4D control over where it sits and how comfortable it is to you. It seems so simple to discuss, but this is probably a feature that is greatly overlooked by many until you’re actually sitting in the chair and need to adjust where your arms go. I found that it gave me a pretty good range of motion as to where I could adjust my options without much hassle. And if you happen to be a wider person, you can unscrew them a little and push them out as needed.

The wheels and the frame at the bottom are also a little different as they went with a lighter plastic mold for the wheels and more of a mental frame for the base. The wheels I completely understand as previous models of DXRacer chairs would dig into the floor and carpet. So they went with a design that would support your body weight better without distributing it directly into the floor as heavily as it used to. Which also gives it a slightly better glide when you’re using it on hardwood floors or linoleum. Whether or not that works as well on carpet we can’t say as that is more of a test-of-time kind of thing that we’re really unable to mess with without dragging it across a carpet 1,000 times. But we’re guessing it will be a little safer on carpet.

Overall, the DXRacer Air Mesh Gaming Chair is an amazing improvement over their other models. We don’t have anything personal against their previous designs, but the fact is there’s no comparison. This is far better in almost every way possible than their Formula Series and is a heavy competitor to their King and Prince series. This was made for comfort and professional use, as well as being able to withstand long hours of gaming, and it meets all the criteria. It’s even an amazing alternative to other gaming chairs that offer the same thing in different ways. The part that will be the real hangup for many is the price, which as this is being posted, currently goes for roughly $450 (depending on what version of the chair you get). If you’re loyal to the brand, this is a must-get upgrade. If you’re not digging your current chair and want something a little different, its worth checking out.