All-white and full of aRGB lighting 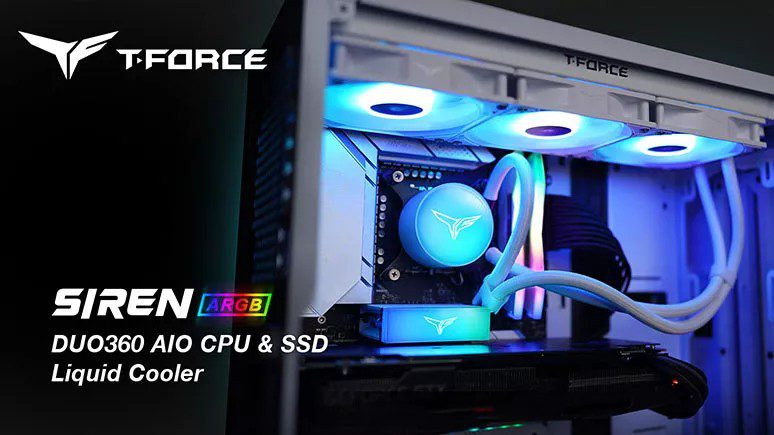 Team Group has launched a new AiO cooler which extends to chill not just your CPU but also your SSD. The descriptively named T-Force Siren DUO360 aRGB CPU and SSD AiO Liquid Cooler features a number of other key attractions — including compatibility with the latest CPUs / sockets like Intel LGA 1700 and AMD AM5, as well as claims that it can reduce your PCIe Gen 5.0 SSD temperatures by >50%.

Available in a frosty-looking white finish, the T-Force Siren DUO 360 aRGB CPU and SSD AiO cooler has a 360mm radiator and triple 120mm fans — about as powerful as is available for mainstream consumers today. With compatibility guaranteed for upcoming Intel 13th Gen Core ‘Raptor Lake’ CPUs, and the new AMD Ryzen 7000 ‘Raphael’ CPUs, it could be a good match for a higher end processor kicking out considerable heat under stress.

Another ‘hot’ component destined to be popular in the new / next-gen systems are M.2 SSDs that connect via a PCIe Gen 5.0 interface. These are attractive thanks to their potentially superb transfer speeds, but they can get hot under sustained loads — which raises the issue of thermal throttling. Many modern motherboards come with heatsinks for M.2 SSDs now, but enthusiast-grade PCIe 5.0 drives will likely require active cooling to ensure consistent performance. Thus, having an SSD cooling plate integrated with your AiO is a pretty attractive idea.

Team Group has done some of its own testing to measure the benefits of the SSD cooling provided by the T-Force Siren DUO360 aRGB CPU and SSD AiO Liquid Cooler using a bare T-Force Cardea SSD PCIe Gen4 x4 and a bare unnamed PCIe Gen5 SSD. The cooler seems to do a pretty good job of reducing both SSDs’ temperatures while idle and while under full load.

The design appears competent overall, and the official specs show that appropriate components and materials have been used for this kind of device. Fan specs, speeds, and noise characteristics are all acceptable, and the cooling blocks are made of aluminum and both feature a copper contact plate. Team Group backs its product with a two-year warranty.

The cooler has also been designed with some visual flair. In addition to the striking white livery, there are addressable RGB zones a-plenty. Each of the three hydraulic bearing fans has its own set of aRGB LEDs; there’s also a circular dual mirror aRGB water block mounted to the CPU; as well as a detachable magnetic aRGB modules that can fit on the SSD water block (or anywhere else you like). 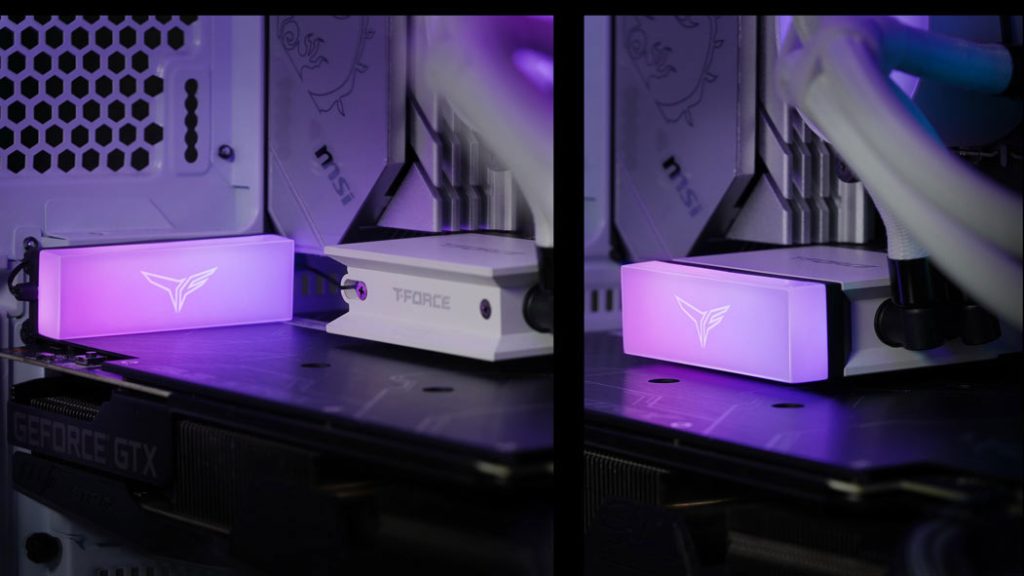 The lighting effects delivered by this T-Force AiO cooler can be controlled and synced with all the usual mainstream systems: Asus Aura Sync, ASRock-Polychrome Sync, Biostar Advanced Vivid LED DJ, Gigabyte RGB Fusion 2.0, MSI Mystic Light Sync, and so on. Some of Team Group’s official product photos show the 360mm AiO in an attractive, mostly-white build.