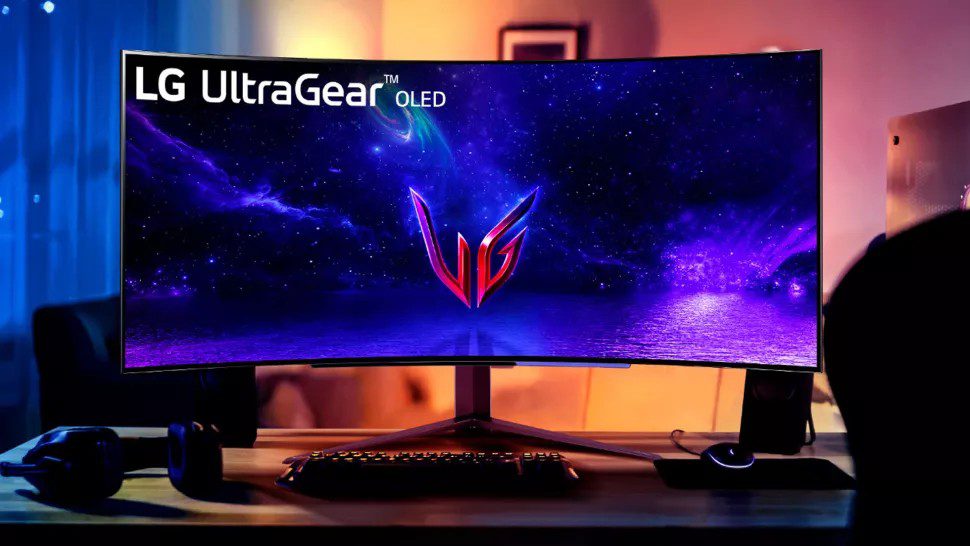 LG is preparing to launch its new curved UltraGear gaming monitor, taking on Samsung in a proverbial clash of display titans.

And “titan” is a good descriptor because LG’s new monitor is huge. You’re looking at a 45-inch ultrawide monitor with a 21:9 aspect ratio and a 1440p resolution (3,440 x 1,440 pixels).  This is essentially LG’s direct response to the Odyssey line, but it’s lacking in certain areas when compared to Samsung’s offering. The Odyssey G9, for example, is a bit bigger at 49 inches with a 32:9 aspect ratio and a resolution of 5,120 x 1440 pixels. However looking at the specs sheet(opens in new tab), the new UltraGear monitor has certain things going for it that may make it the better choice.

For starters, it’s an OLED (Organic Light Emitting Diode) display whereas the G9 is QLED (Quantum Dot Light Emitting Diode). The main difference is OLED screens usually have better image quality, which is seen as darker blacks and brighter whites. They also sport “reduced power consumption [and] faster response times” which is very important to have for high-level gaming. It can mean the difference between victory or defeat in certain titles. LG’s latest offering takes it one step further by being one of the first OLED monitors to have a 240Hz refresh rate and promises to have a .03ms response time.

The new UltraGear also has a curvature of 800R making it rounder than the G9, which has a curvature of 1000R. This results in greater immersion for gamers as the monitor will cover more of your peripheral vision while also reducing eye strain, according to ViewSonic.(opens in new tab)

Other notable features include anti-glare protection, compatibility with Nvidia G-Sync for added performance, and support for HDR10 to ensure vivid colors. If you’re hoping to get the new UltraGear in time for Christmas, you’ll, unfortunately, be disappointed. Pre-orders start on December 12, but the display won’t begin shipping out until December 28th. And because OLED screens are typically more expensive, you’re looking at a $1,700 price tag.

LG has a sign-up page(opens in new tab) for the curved UltraGear so you can be notified when pre-orders start.

Is it worth it?

There’s one question that remains: is an ultrawide monitor like this worth it? Assuming you can afford it, we say yes. Having a 45-inch curved monitor can be pretty helpful. If you play RPGs like Final Fantasy XIV or World of Warcraft, you’ll find yourself having way more room for various UI elements so it’s not all a jumbled mess. And if you have work to do, you essentially have two, maybe three, regular-sized monitors rolled into one. Ultrawide monitors are certainly pricey, but the added utility makes them a worthwhile investment.

Be sure to check out TechRadar’s best gaming monitors list for the end of 2022. We cover a wide variety from massive 49-inch monitors to low-cost 4K options.