AMD vs. Apple vs. Intel. We had to wait quite a while but we finally got our hands on AMD’s latest mobile processors from the Ryzen 6000U generation. We compare the Zen3+ cores of the new Ryzen 7 6800U with Intel’s current Alder Lake-P platform as well as Apple’s M1 Pro SoCs. Who builds the best chip for compact laptops? Update: Results for Ryzen 7 5800U added

AMD’s new 45W processors from the Ryzen 6000 series have been available for a couple of weeks and now we finally have the chance to take an in-depth look at the new Ryzen 7 6800U. The 6800U is a member of the U-series with a nominal TDP of 15W, but AMD already lists a range between 15-28W. Intel only released the new Alder Lake-P models with a much higher TDP so far. The nominal claim is 28W, but we already saw that the new Intel chips consume much more power during our reviews. The real competitor from the Alder Lake-U series, the Intel Core i7-1265U, is not available yet. We will therefore focus on the comparison with the Alder Lake-P CPUs for now, but the results for the single-core performance with the new P-cores should be very similar since the U-series uses the same P-cores. AMD does not really see Apple as a major rival, but we will still include Apple’s M1 Pro CPUs in our analysis, which have proven to be very efficient. 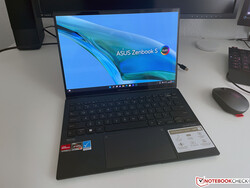 Our test system for the new AMD Ryzen 7 6800U is the Asus Zenbook S 13, which is extremely compact at little more than just 1 kg. Asus offers three different power profiles and we used the Performance setting for the following benchmarks (Windows Power Plan: Asus Recommended, Windows Power Mode: Best Performance). The CPU can consume up to 30W and settles at 25W under sustained workloads, so this will probably be one of the faster implementations. The full review of the Asus Zenbook S 13 will be published in a couple of days 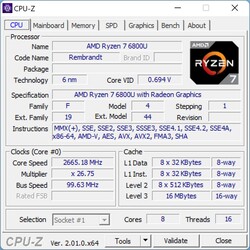 We start with a quick comparison of the chip architecture since there are major differences between the three contenders. Apple successfully uses a hybrid architecture with Performance and Efficiency cores for its M1 chips and Intel’s new Alder Lake CPUs also follow this principle (even though there has already been a Lakefield hybrid chip in the past). However, Intel uses more Efficiency cores and less Performance cores, even though there are different configurations depending on the exact model.

AMD on the other hand still follows the same approach we know from the Ryzen 5000 CPUs with a total of 8 cores for the Ryzen 7 6800U and 6 cores for the slower Ryzen 5 6600U, respectively. AMD now uses Zen3+ cores, which are manufactured in a more advanced 6 nm process and the cores have been further optimized for efficiency. This means AMD has already caught up with Apple (5 nm) and clearly ahead of Intel with the 10 nm process.

Customers can also expect advancements in terms of features. In addition to fast LPDDR5-6400 memory, system will support USB 4 (including Thunderbolt compatibility) with up to 40 Gbps, Wi-Fi 6E, and fast PCIe 4.0 SSDs, so there are no disadvantages compared to Intel systems. We will have a closer look at the new Radeon 680M iGPU in a separate article. 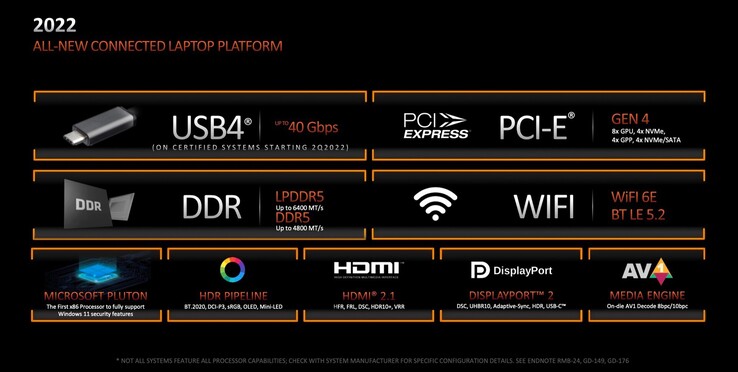 We use a total of six comparison systems for this analysis. We included three rivals with modern Alder Lake CPUs from Intel (2x Alder Lake-P & 1x Alder Lake-H), but we will also compare the Zen3+ cores with the previous Zen3 cores (Ryzen 5 5600U) and Apple’s M1 Pro CPUs (with 8 and 10 cores) as well. We have listed all the comparison devices in the table below, including their respective TDP settings. We do not have access to a system with the Ryzen 7 5800U right now, but we will add the results as soon as possible.

Update 06/05/2022: We now have test results for the Lenovo IdeaPad 5 Pro 14, where the Ryzen 7 5800U runs at 30W in the Performance mode. However, we cannot offer any data for the single-core tests since the HWiNFO values are highly irregular (the consumption of a single core is higher than all cores combined, which does not make sense), and we do not know why at the moment. We will therefore only include the multi-core results for the time being.

The raw performance is one aspect, but we are going to focus on the efficiency of the current CPU generation in this article. We used the synthetic benchmark Cinebench R23 on all system since it runs natively both on Windows laptops as well as M1 MacBooks. The two tests (single-core & multi-core) were logged (HWiNFO) and then analyzed afterwards. We will therefore include the actual consumption during each benchmark run, which is usually somewhere between the power limits in the multi-core tests. For the MacBooks, we used the PowerMetrics functionality to get the data. We can see the actual consumption of each core on AMD systems and MacBooks, which is not possible on Intel laptops.

Apple’s M1 Pro is a very efficient chip, especially in single-core scenarios. We can only observe a CPU package consumption of just 7W and around 4W for the active core, which means Apple has a noticeable advantage (2.4x) compared to AMD’s Zen3+ chip. Apple is still ahead in this category and the M1 chip is almost two years old.

We have already shown that the new Alder Lake processors are very powerful thanks with their Performance cores and also faster than the rivals, but the Performance cores fall behind AMD’s new Zen3+ cores in terms of efficiency. The comparison between the three Intel models is also very interesting, because the Performance cores are basically identical on all three models. The maximum clock of the Core i5-1240P is lower, so it is more efficient. The Core i7-12700H has a slightly higher package power than the Core i7-1260P, which should be a result of the two additional Performance cores. However, our results once again show how inefficient the 10 nm chips are at higher clocks. The upcoming U-series models use the same P-cores and Intel lists a maximum clock of 4.8 GHz for the Core i7-1265U, for example, which is even 100 MHz higher compared to the Core i7-1260P and Core i7-12700H, so we expect a very high single-core power consumption.

We have listed all test systems in the following overview ranked by their efficiency (CPU package power).

The clocks of the individual cores are obviously a bit lower in multi-core scenarios, and we can see a small advantage for the new Ryzen 7 6800U with the Zen3+ cores compared to the old Ryzen 5 5600U. Once again, we will add the results for the Ryzen 7 5800U as soon as possible.

We were curious to see how the new CPU performance at lower power levels and repeated the Cinebench R23 Multi test in the Whisper mode setting of the Zenbook S 13, which reduces the TDP limits of the Ryzen 7 6800U to 12W (Package) and 10W for the cores. The efficiency increases dramatically, which means the Ryzen 6000U chips are also a very good choice for systems with a comparatively limited cooling performance (like 15W for example), where they would still perform pretty respectably.

Apple’s M1 CPUs have a package power of 25W for the 8-core system and 31W for the 10-core version of the M1 Pro. This means Apple is still ahead, but the AMD Ryzen 7 6800U is much closer and almost on par in terms of CPU package power.

The efficiency advantage of the new Ryzen 7 6800U over the current Alder Lake models is much bigger in multi-core tests and contrary to the single-core tests, there is no real performance advantage anymore, either. Even the Core i7-1260P with a much higher power consumption is just slightly ahead in the benchmarks and our results once again show how inefficient Alder Lake is at higher consumption values. The Core i5-1240P in the Yoga Slim 7 Pro consumes much more power than the Core i7-1260P in the Yoga 9i 14, but this is hardly noticeable in the performance.

It is also interesting to see how Alder Lake-P chips perform at lower power levels when the cooling performance is limited. This is the case for the Samsung Galaxy Book 2 Pro 13, where the CPU is quickly limited to just 20W. The efficiency increase is very small compared to the gains we saw for the Ryzen 7 6800U at 12W, which means Intel’s hybrid architecture with the 10 nm cores is not really suited for very compact systems. These are not good news for the upcoming Alder Lake-U CPUs, which are positioned in the 15W class. However, Intel still lists a maximum consumption of 55W, even though these chips are only equipped with 2 P-cores. Based on our results so far, we do not believe the Alder Lake-U systems will be very competitive, neither in terms of performance, nor efficiency.

We once again listed all systems based on their efficiency below. Apple’s M1 Pro is once again at the top, but AMD is almost on the same level with the new Ryzen 7 6800U. Intel’s current Alder Lake models on the other hand clearly fall behind in terms of efficiency.

In addition to our measurements with Cinebench R23, we also want to have a look at Cinebench R15, which is tested in combination with an external display by default in our reviews, so we can eliminate the internal screen for the consumption results. Note: Cinebench R15 has to be emulated on the M1 MacBooks, so the performance is lower and our reviews show that the chips also consume more power in these scenarios. Cinebench R15 Multi is not a very long benchmark, either, so many Intel devices can often utilize their full power limit during the first benchmark run.

All in all, the picture is very similar, because the new Ryzen 7 6800U is at the top and does not only clearly beat the old Ryzen 7 5800U, but also the Alder Lake models. However, we do not want to dismiss the fact that Intel was able to improve the efficiency compared to the old Tiger Lake mobile CPUs like the quad-core Core i7-1165G7.

The new AMD Ryzen 7 6800U leaves a very good impression so far. The single-core performance is not as good as on the new Alder Lake chips, but the multi-core performance is comparable and the new Ryzen CPU is way more efficient. AMD also managed to improve the integrated GPU, but we will take a closer look at the new RDNA2 GPU in a separate article.

We expect more laptops with Ryzen 6000U CPUs in the next couple of weeks and the real rivals for the 6000U models, the Alder Lake-U chips like the Core i7-1265U, should be available in a few weeks as well. They use a similar hybrid architecture as other Alder Lake chips, but with fewer P-cores. Intel still lists a maximum consumption of 55W, which worries us a bit. The high consumption values do not only result in shorter battery runtimes (even with simple workloads), but we also observed more frequent fan activity in our reviews so far.

Based on our results so far, the AMD Ryzen 6000U chips are the best mobile processors for Windows laptops right now. The big question is if manufacturers will use the AMD chips for their premium laptops and if they will be available in larger quantities, where Intel has an advantage right now.