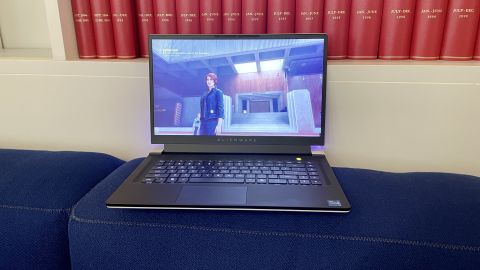 Alienware’s X-series laptops are thin, with a sleek design, straddling the line between subtle (for a gaming laptop, anyway) and stylish thanks to some well-placed RGB lighting. Think of the line as gaming laptops for those who prefer a more mature, muted design.

Although the x15 R2 has a relatively clean and thin design for a gaming laptop, its Intel Core i7-12700H and Nvidia Geforce RTX 3070 Ti utilize the laptop’s quad-fan cooling system and its Element 31 thermal interface material to improve the cooling efficiency. But despite everything it has going for it, the laptop’s performance falters against some of its competitors, and the laptop still gets toasty

The Alienware x15 R2 has a sleek design with an all-white exterior, and a thin, 0.62-inch chassis. Despite its clean, nearly professional appearance, a large, stylized “15” and medium-sized RGB alien head on the lid remind you it’s a gaming rig. When you lift its spacecraft hatch of a top, the exterior is flipped from white on the lid to all-black on the inside, with a soft-touch wrist rest and slight bezels surrounding the 15.6-inch display.

The keyboard features per-key RGB lighting, and there’s another alien head that lights up on the top-right corner of the laptop that serves as a power button, amidst the honeycomb ventilation cutouts. There are also two slim vents on each side, going down the length of the keyboard.

Despite its slim profile, the Alienware x15 also features a quad-fan cooling system that pushes air out of its side and rear honeycomb vents at independently-controlled speeds. Alienware also utilizes a thermal interface material called  “Element 31,” which claims to let gamers enjoy consistent frame rates over extended periods of playtime. We’d love to be able to compare Element 31 to see if it compares to the best thermal paste and other thermal interface materials in our testing, but Alienware doesn’t offer Element 31 as a standalone product.

Most of the ports are on the back of the laptop next to the vents, surrounded by a giant RGB light ring.  The power jack is the only port on the laptop’s left side, and on the right, there’s a 3.5 mm headphone jack. In the back, there’s a USB Type-A port, a Thunderbolt 4 port, a USB Type-C port with PowerDelivery and DisplayPort capabilities, a microSD card slot, and an HDMI 2.1 port. How much it matters that nearly all the ports are on the back will largely depend on how you use your laptop, but it’s certainly convenient at times to have some ports on the side, where they’re found on many other gaming laptops.

While playing Control (highest settings) with Ray Tracing settings high at 1440p, the x15 wavered around 53 to 60 frames per second, zooming around the Central Executive area and tilting the camera in the opposite direction. When I turned on DLSS with V-Sync, I stayed at a consistent 60 fps in that location with little to no screen tearing while running and rotating the camera. Without DLSS and V-Sync activated, the game suffered screen tearing.

On the Red Dead Redemption 2 benchmark (medium settings), we saw the Alienware x15 R2 output 66 fps at 1080p and 44 fps at 1440p. Although competitors weren’t too far ahead, the Alienware once again was the slowest here.

Finally, on the Borderlands 3 benchmark (badass settings), the Alienware x15 R2 reached 82 fps in 1080p and 57 fps at 1440p. This time, the Predator and Razer Blade underperformed, both hitting 76 fps at 1080p, with the Acer hitting 52 fps and the Razer managing 58 fps at their native resolutions.

On gaming laptops, we stress-test by running the Metro Exodus benchmark on RTX settings 15 times, simulating about half an hour of gameplay. The game ran at an average of 57 frames per second, fluctuating between 48 and 60 frames per second throughout.

During the stress test, CPU speeds came in at an average of 3.5 GHz on the performance cores and 2.8 GHz on the efficiency cores. The temperature of the CPU averaged 80.2 degrees Celsius (171.14 degrees Fahrenheit), and HWInfo reported some CPU thermal throttling in the middle of the test. The GPU ran at an average of 1,098 MHz and a temperature of 78 degrees Celsius (172.4 degrees Fahrenheit).

We tested the Alienware x15 R2 with an Intel Core i7-12700H, 32GB of LPDDR5 RAM and 2TB of SSD storage. Although the Alienware x15 didn’t rise to the top in most of our gaming tests, it did well on our productivity benchmarks.

When we tested video transcoding with our Handbrake test, the Alienware x15 R2 and Lenovo Legion 5i Pro were the fastest to convert a 4K video to 1080p, both taking the same 4 minutes and 29 seconds. The Acer Predator wasn’t too far off at 4:32. However, it took the Razer Blade 15 7:25 to get the same job done.

When I watched Doctor Strange and the Multiverse of Madness, I almost lost myself in the film thanks to how great it looked. Despite just watching the movie over the weekend on my 48-inch LG CX, I felt like the visuals held up almost as well on the 15.6-inch display, which is a testament to this non-OLED laptop monitor. The colors during the bombastic, neon-skewed opening action scene were vivid. The nits elevated the bright scenery during the wedding scene, and the visuals were sharp.

I had an equally excellent gaming experience with the x15’s display. The illumination from the display elevated the game’s ray tracing when I played Control. The Central Executive area’s lights and reflections looked superb. The colors were rich, and my movements were buttery smooth with the game capped at 60 frames per second, and V-Sync turned on. (If you have a game that doesn’t suffer from tearing –or you can ignore it– you should be able to get a nice smooth frame rate up to 240 fps.) The anti-glare screen effectively prevented distracting reflections, too.

The keys on the Alienware x15 R2 are snappy, if not a bit stiff for typing. Although keystrokes are responsive, the keys quickly pop back up after each input. That makes the keyboard more fit for gaming than it is typing. Regardless, I felt comfortable clacking away on the keys and hitting 53 words per minute with 92% accuracy on 10fastfingers, which is around my usual score on laptops.

Although the touchpad was responsive to all my Windows swipe gestures and felt cool and sleek to the touch, I would prefer if the touchpad were bigger. Compared to many other modern laptops, the touchpad area is shockingly tiny, and it was one of the first things I noticed, despite the otherwise beautiful design. While most gamers will use a mouse for gaming, having a roomy touchpad for productivity use on the go is still nice, and you don’t get that here.

Audio on the Alienware x15 R2

The speakers on the Alienware x15 R2 produce great volume, but their emphasis on vocals drowns details out when listening to music. When I played “Texts Go Green” by Drake, the synths and percussion took a backseat to the vocals, which were much more prominent than usual. The rest of the instrumentation lacked range and detail. When I played “Deep Down” by Josh Gabriel and Winter Kills, the kicks were audible, as were the vocals, but the small ambient details I love about the song were not as noticeable.

However, when watching movies, the focus on voices comes in handy. While watching Doctor Strange and the Multiverse of Madness, the high volume and emphasis on speaking gave the film a theatrical feel. When the action got loud, the speakers got loud. But sometimes, audio became cracked or distorted, like when America Chavez shouted a warning about an attack from fake Shuma-Gorath to Doctor Strange early in the film.

Dolby Access offers balanced, warm, and detailed options for music and movie presets that even out, deepen the bass, and raise the treble, respectively. But the app also offers dynamic and voice options that make each respective effect sound worse once activated. And outside of the Realtek Audio Console, there’s no software installed to improve the audio.

I used a  Phillips head screwdriver to take five of the six screws out of the Alienware x15 R2. One of the screws, I realized, was captive. I needed a pry tool to get it and the lid off completely. Besides the alien head at the center, I immediately noticed the empty SSD slot, which means you could add more storage later. Whether this is empty on your unit will depend on the configuration. The laptop’s network card was accessible, and the battery could be removed. Unfortunately, the computer has soldered RAM, so that can’t be upgraded. Get this laptop with as much RAM as you think you’ll need.

On our battery test, which involves streaming video, browsing the web, and running OpenGL tests over Wi-Fi with the display at 150 nits of brightness, the Alienware x15 R2 ran for an abysmal 3 hours and 27 minutes. Although I don’t expect many folks to be gaming without plugging in, that’s low when compared to some other recent 15-inch gaming notebooks. The Acer Predator ran for 8:19, the Razer lasted 4:54, and the Legion clocked in at 7:30. Be prepared to make space for the power adapter in your bag if you’re carrying an Alienware x15 R2 around, but thankfully the brick isn’t too big.

Software and Warranty on the Alienware x15 R2

The Alienware x15 has far too much pre-loaded software. Some of it is useful, like Alienware Command Center, a hub app that lets you control lighting, audio, and change power profiles. My Alienware lets users look into system details and warranty information. But Alienware Customer Connect asks users to fill out surveys about other Dell products, which is unnecessary.

Alienware Update checks for the latest BIOS, drivers, firmware, and application updates. Alienware Digital Delivery is an app that delivers software purchases you may have made at the time of sale. Lastly, there’s Alienware OnScreen Display, an app that directs you to the notification section of Windows 11’s settings to adjust how you want Alienware notifications to appear.  Some of this doubles up on features in Windows 11, so it seems like a lot.

On the Windows side, there’s the usual Microsoft cruft that many will never use: an Xbox and Xbox Game Bar app, Spotify and Microsoft Teams.

Dell sells the Alienware x15 R2 with a 1-year warranty, but you can pay extra for extended coverage.

The Alienware x15 R2 remains a slim, sleek beauty with just the right amount of RGB. The black-and-white exterior looks superb, as does the backlit keyboard. And that’s before mentioning how much I enjoyed the visuals from its 15.6-inch,1440p display (even if others did better on some measurements)

But despite the Alienware x15 R2’s strong performance in both gaming and productivity, its competitors often outpaced it in gaming.

Suppose you don’t mind dropping a bit of flare. In that case, the Lenovo Legion 5i Pro is a competitor that excels at gaming and productivity, battery life, and has a screen with better sRGB and DCI-P3 color gamut percentage. (It should be noted, however, that it may be difficult to find the exact configuration we reviewed right now).

But if you need a stylish laptop and don’t mind sacrificing a bit of gaming performance for some cool design, the Alienware x15 R2 is a solid choice with a bevy of ports and upgradability options to meet your needs.

Newer REDRAGON M686RGB Vampire Elite Wireless Gaming Mouse Instruction Manual
Back to list
Older Core i7-12800HX vs. Ryzen 9 6900HX benchmarks show Intel ahead of the game but at a huge cost to your power bill