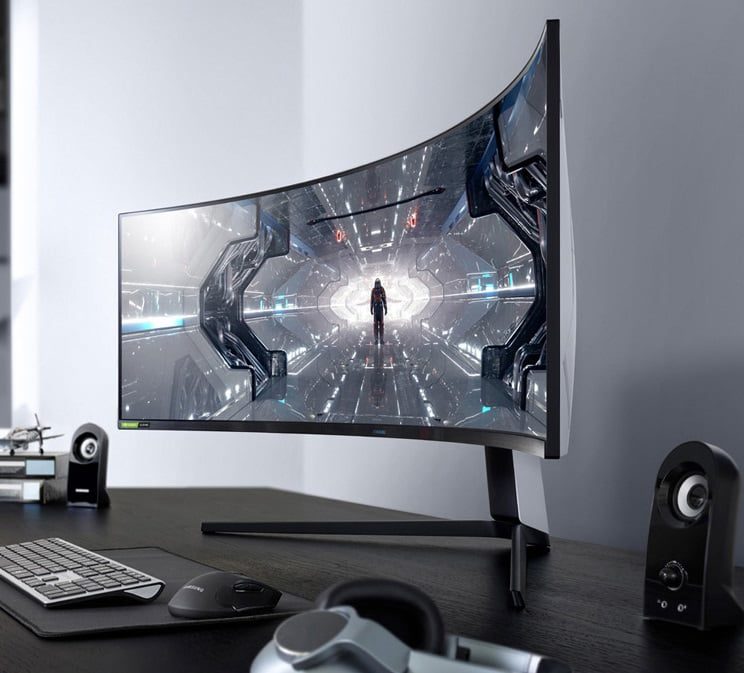 The exciting update to Samsung’s Odyssey G9 display was announced back on 3 March 2021 with limited information provided at the time by the manufacturer Samsung. We now have some more detailed information about the expected spec and features thanks to an early product page that has appeared on Chinese retailer Taobao. The Samsung Odyssey Neo G9 (full model name was originally listed as S49AG95NC, may actually be S49AG950) will be the successor to the existing G9 model and is aimed at gaming and HDR multimedia. It keeps the same large 49″ ultrawide format, 1000R steep curvature and 5120 x 1440 resolution as the current G9. It will still be based on a VA technology panel with a 240Hz native refresh rate and a wide colour gamut. What makes this new version particularly interesting is the addition of a Mini LED backlight for improved HDR performance and local dimming. 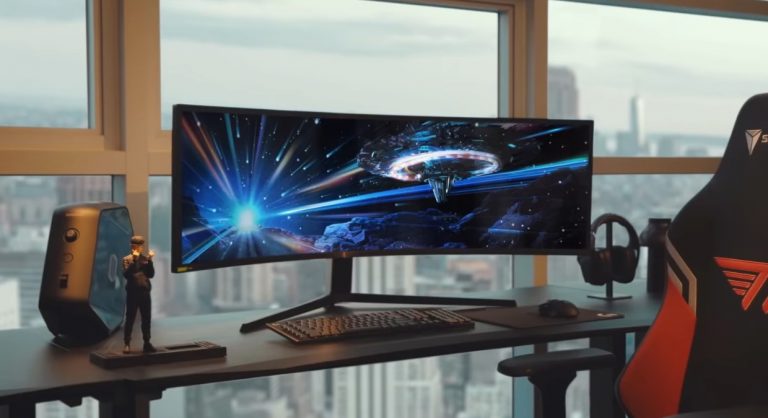 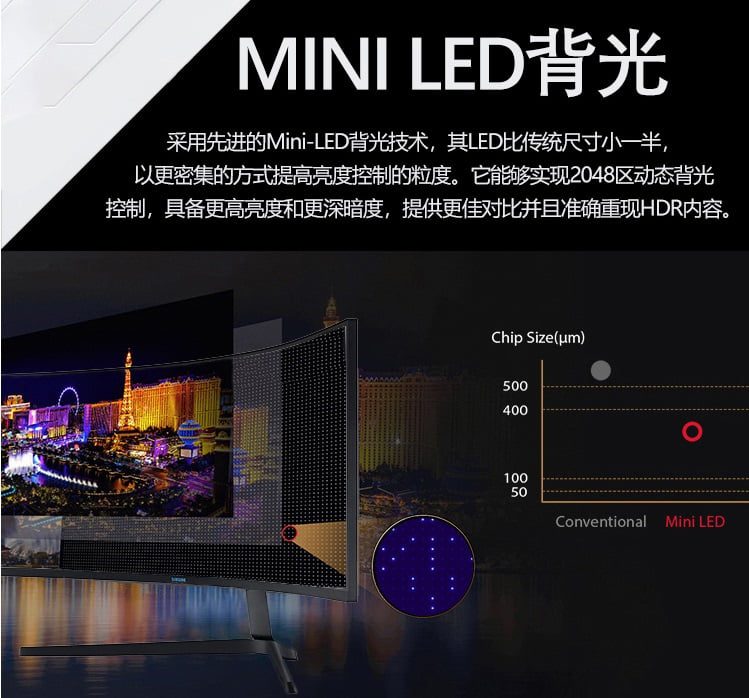 One of the key features to this upgraded Neo G9 (aka G9v2 as we were originally calling it) is the Mini LED backlight. Samsung are calling this a “Quantum Matrix” backlight with “Quantum Mini LED’s”. Obviously everything has to have the word “Quantum” in it for it to be considered by Samsung!

This will offer 2,048 local dimming zones which should provide significantly improved local dimming capability compared to the existing G9 model which has a very limited number of edge lit dimming zones and offers fairly poor implementation for HDR as a result. The high number of zones helps minimize blooming and halos in HDR content and is a step beyond even current FALD backlight models which have fewer zones.

Thanks to the Mini LED backlight the screen is was originally listed on the Chinese retailer Taobao as featuring VESA DisplayHDR 2000 certification. This is not actually an officially announced certification level yet from VESA, although it’s probably reasonable to expect it to appear alongside this monitor and other possible future screens, with the only real difference from existing HDR 1000 and HDR 1400 levels being an increased peak brightness.

Samsung instead simply list this as “HDR2000” on their spec pages so far which starts to make things confusing as it implies it is conforming to VESA’s criteria, when really it’s just their own label of some sort! We’d like to see the screen officially certified by VESA one way or the other really.

However you look at it the HDR 2000 label suggests, and the listed spec confirms, that the updated Odyssey Neo G9 display will offer a peak brightness of 2000 cd/m2 which is impressive and should help produce bright highlights in HDR content. Samsung also list a 1 million:1 contrast ratio with the Mini LED backlight dimming active.

As well as the impressive number of dimming zones from the Mini LED backlight and the high peak brightness, the Neo G9 also offers a 10-bit colour depth and wide colour gamut thanks to the use of Quantum Dot coating. A 95% DCI-P3 coverage is quoted. 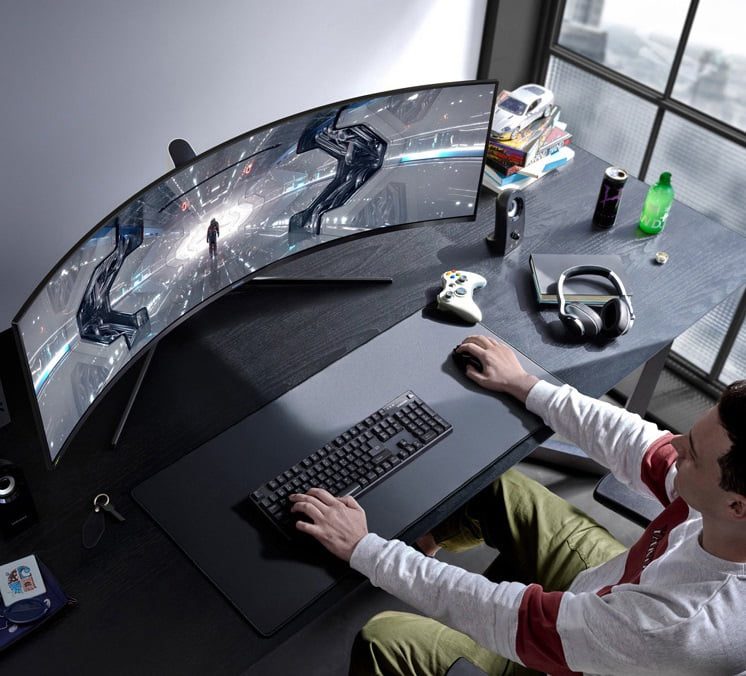 To help support the high resolution and 240Hz max refresh rate, the screen is listed on Taobao as being G-sync Compatible which means it uses adaptive sync for VRR from both AMD and NVIDIA systems. The NVIDIA G-sync Compatible certification is presumably pending given it’s not yet listed on NVIDIA’s website as it is so new, although not listed on Samsung’s pages so far so perhaps it is not going to be applicable here. AMD FreeSync Premium Pro certification is however listed and expected.

The absence of a Native G-sync module might cause some complications here with usage of the Mini LED backlight at the same time as VRR. That is incredibly complex to develop and one of the reasons why current FALD and Mini LED gaming monitors use the G-sync module. We will wait to see how this performs on the Samsung Odyssey Neo G9 and whether the Mini LED backlight can keep up with VRR and gaming properly and effectively. 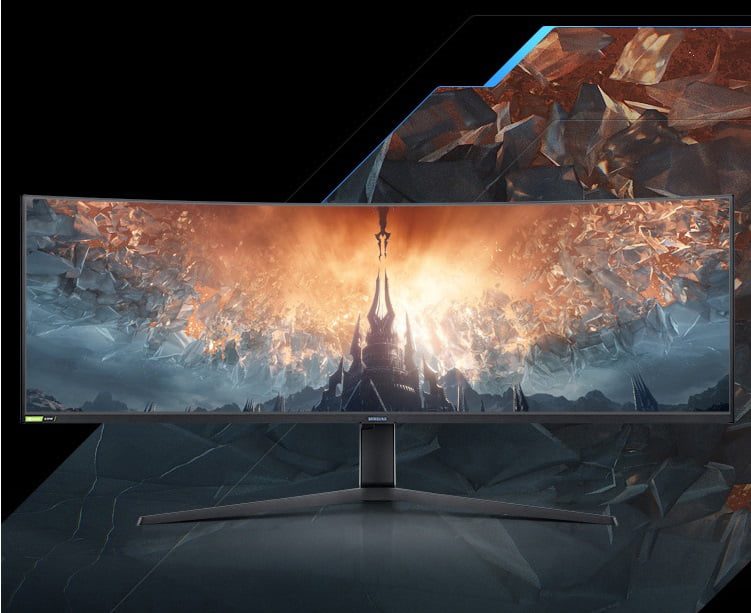 Update 2/6/21 – by the look of this Samsung parts page it looks like the panel used in this screen (and the Acer equivalent) will be from manufacturer CSOT, and will be the CY-PA490QLHV1H.

For connectivity 2x DisplayPort 1.4 and 1x HDMI 2.1 connections are listed along with 2x USB 3 ports and an audio output. RGB lighting is featured on the screen as well like the current G9. PbP and PiP are also listed as features. The stand offers tilt, height and swivel adjustments. 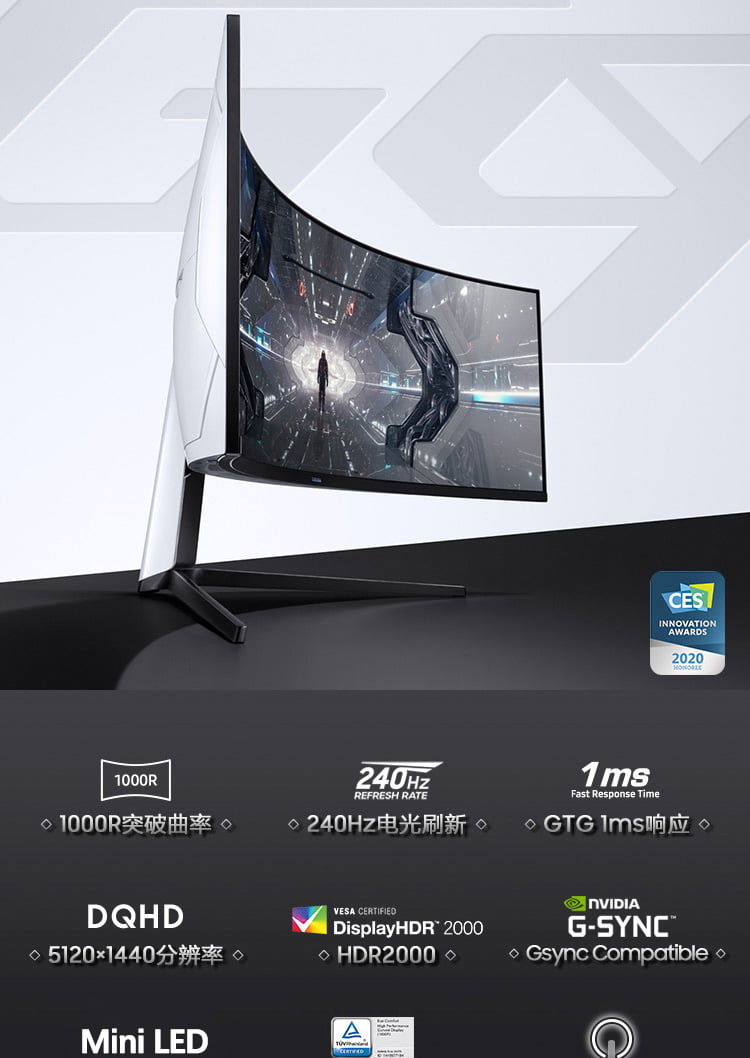 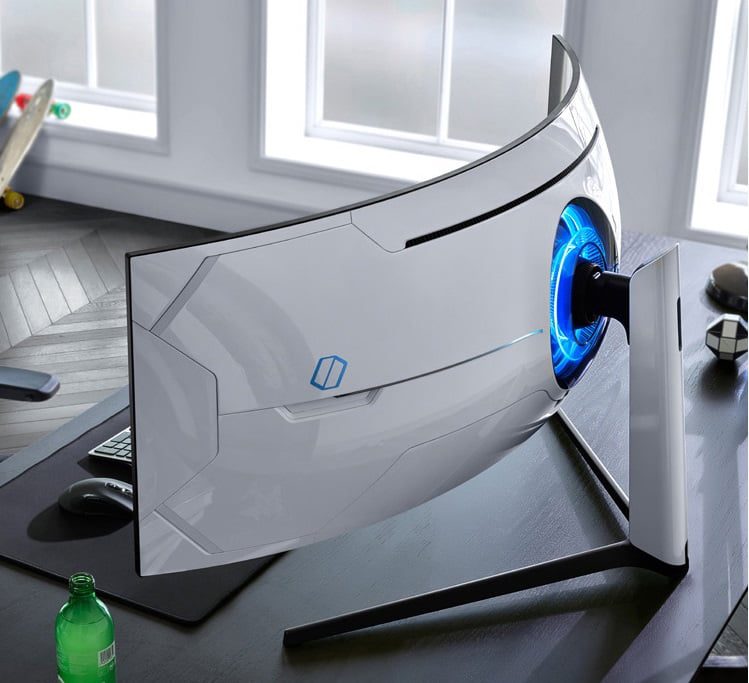